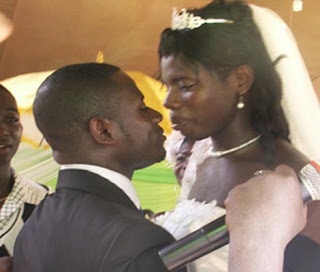 In the face of the brouhaha that has recently engulfed the Ghanaian society concerning homosexuality, DAILY GUIDE has stumbled on a classic example of the reality of gay marriages in the country.

Nana Kwabena Bennie, popularly called Komfo Bennie of Apentamadi shrine near Sefwi Wiawso in the Western Region, has told DAILY GUIDE that his penis had indeed mysteriously vanished one night in 2010 and was replaced with a vagina because he disobeyed the gods he served, and that he later got married in a grand style.

“Whether people believed it or not, I had the practical experience after some excruciating pains in my waist and later my penis turned into a vagina after I woke up from sleep. The gods had warned me earlier not to marry, but as a man I couldn’t help it and married Nana Ama from Amafie near Sefwi-Wiawso and brought her to my shrine at Apentamadi”.

The fetish priest said he immediately informed his biological father, Kofi Nyame and a certain Aunt Esi, Gyantuahemaa, of his unusual plight, so the woman examined his penis and saw it had turned into a vagina.
The fetish priest, 25, who claimed to have been mysteriously turned into a woman by the gods and alleging that he gave birth to a baby girl, is in court for deceiving the public and baby theft, among others.

According to Komfo Bennie, he invited 18 other powerful fetish priests and priestesses from the various shrines to team up with him to beg for forgiveness.

In the end, she (Komfo Bennie, when she had become a woman) provided one cow, a sheep and a dog to pacify the 31 gods.

“My colleague fetish priests and priestesses teamed up with me to consult our various gods and dwarfs for eight days, pleading with them to turn me back into a male, but to no avail, by then I had divorced Nana Ama, my wife,” he claimed.

He said there were speculations all over Sefwi and beyond, but he was cork-sure that at that time, he was carrying a female sex organ.

“I must confess that some young men doubted me to such an extent that I could not help but prove a point. I willingly allowed them to have sexual intercourse with me and they all know themselves,” Komfo Bennie stressed.
Culled From: ghanaweb