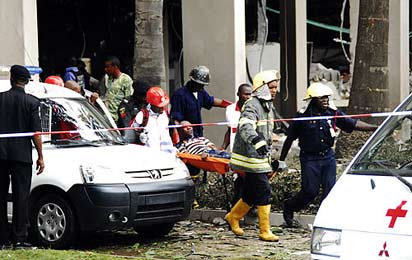 There is evidence, according to security sources, to suggest that the now dreaded Ahlan Sunnah Lid Da’waati wal Jihad Yaanaa (brothers), popularly known as the Boko Haram s ect, sent some eight persons to Algeria in North Africa for learning how to make Improvised Explosive Device, IEDs, Sunday Vanguard can reveal.

And, from all indications, those they sent appeared to have learnt well. They appear to have perfected the art of making IEDs which is now being used in the country.

Therefore, when the Department of State Service, DSS, last Wednesday issued a statement declaring one Mamman Nur wanted in connection with penultimate Friday’s bombing of the United Nations, UN, House in Abuja, explaining further that Nur had just returned from Somalia, it only went further to corroborate Sunday Vanguard’s story of July 18, 2011, that the sect was in collaboration with foreign terror organisations such as al-Shabab and al-Qaeda In Maghreb, AQIM.

In fact, a report last month quoting General Carter Ham, AFRICOMS Commander, as saying that Boko Haram is now in league with al-Qaeda In Maghreb as well as al-Shabab, further goes to demonstrate the growing reach of Boko Haram.

Sunday Vanguard has discovered that in the face of the intelligence gathered by the security agencies days before penultimate Friday’s bombing, a challenge was confronted.
They had a problem releasing the information.

In retrospect, imagery of what might have happened continues to linger in the consciousness of Nigeria’s security chiefs.
According to information pieced together last week, Sunday Vanguard was made to understand that the arrest of Babagana Ismail Kwaljima (a.k.a Abu Summaya); and Babagana Mali (a.k.a Bulama), was supposed to be a major break in the continuing crucial search for men. But handling the sensitive nature of the information about the arrest was a major problem.
And, whereas the information released by the Department of State Service, DSS, on Wednesday, August 31, 2011, disclosed that “On August 18, 2011, precise intelligence was obtained by this Service that some Boko Haram elements were on a mission to attack unspecified targets in Abuja in an ash-coloured Toyota Camry vehicle with number-plate AA539GBL”, adding that “On August 21, 2011 about 1300 hours a joint operations by all security services led to the arrest of two notorious leaders of the Boko Haram extremists sect, namely, Babagana Ismail Kwaljima (a.k.a Abu Summaya);and Babagana Mali (a.k.a Bulama), there was still the need for proper coordination of security activities.
The DSS statement signed by its Assistant Director, Public Relations, Marilyn Ogar, said in part that “Investigation has revealed that one Mamman Nur, a notorious Boko Haram element with al-Qaeda links who returned recently from Somalia, working in concert with the two suspects masterminded the attack on the United Nations (UN) building in Abuja.
“Further investigation has also revealed that the car used for the attack was a Honda car with Kano State number-plate AV38NSR. It was purchased on September 3, 2002 and registered on December 3, 2002. The vehicle identification number is 1HGCBA7400A100748, Engine number, F22A72000540.
“The security services wish to reiterate their commitments to ensuring that we have a safe, peaceful and secure environment. We want to reassure Nigerians that we have no other country and we must all strive to maintain its unity which is currently being threatened.”
Following their arrests, security was further beefed up in Abuja and its environs, though the nature of the attack was not fully comprehended.
The man who supplies materials for the making of Improvised Explosive Devices, IEDs, to members of the Sect has been arrested DSS (also known as the State Security Service, SSS). This break- through came as a result of confessional statements obtained from the earlier arrested members of the sect, Kwaljima and Mali.
During interrogation, Kwaljima and Mali told the authorities that they had taken part in some bombing ventures in some parts of the country.
Sunday Vanguard gathered that the men confessed to having taken part in bombings in Bauchi and Maiduguri.
Sunday Vanguard was told by security sources that indeed, security was beefed up in the Federal Capital Territory, FCT, Abuja.
However, the UN House missed the radar of the intelligence and security communities.
“Knowing the pattern of the activities of the group”, a security chief told Sunday Vanguard, “we moved to safeguard some strategic locations in the capital city”.
Information made available to Sunday Vanguard suggested that part of the reasons why the bomber chose the UN House “may not be unconnected with earlier intelligence about the bombings which were planned for the city but which the authorities got wind of.”
In fact, according to a security chief, “Adequate arrangements were put in place once we learnt of the plans of the sect members. That was why places such as the Federal Secretariat, National Assembly Complex, headquarters of Nigerian National Petroleum Corporation, Central Bank of Nigeria, CBN, Complex, and embassies were fully secured.”.
Information made available also indicated that the choice of the UN House by the sect may have been a last minute option “with the intention of inflicting maximum hurt and generating optimum though negative attention”.
Already, the arrested supplier is making useful information available to his interrogators.
Meanwhile, on the issue of a seeming shoddiness in the handling of the intelligence about the intended bombing in Abuja, another security source told Sunday Vanguard that “the nature of the intelligence we got was not target-specific and, therefore, what happened was a situation where we prioritised the areas of coverage”.
However, the UN House missed the radar of the intelligence and security communities.
“Knowing the pattern of the activities of the group, we moved to safeguard some strategic locations in the capital city”.
For Boko Haram, it was the unholy alliance between the late Mohammed Yusuf and Mohammed Ali that gave birth to the sect. Yusuf was the sect’s leader allegedly killed in police custody in December, 2009.
While both men are now dead, Abubakar Shekau, Yusuf’s former deputy, is said to be in charge now.
Sunday Vanguard gathered that Ali was very intelligent and was a man with means.

And, whereas Yusuf had four wives and 12 children, a number that is indeed enough to begin a crusade, Ali was the actual brain and strategist of the sect.
In fact, when some time in 2003, Yusuf was reportedly diagnosed with tuberculosis, he travelled out for treatment. Upon travelling, Ali took charge of the group’s activities.
Yusuf was said to have been out of the country for about four years.
As if Ali had dedicated his life to what is now the struggle, Sunday Vanguard was made to believe that he was offered a scholarship some time ago to study in Saudi Arabia, but Ali refused the offer.
While Yusuf was out, Ali set up a base in Kanamma, Yobe State, from where the then seeming rag-tag followers of the brotherhood operated. The base was named Afghanistan. Acting on a tip-off, security agencies invaded the camp and flushed out the members.
But they only scattered; the group refused to disband. In- deed, it waxed stronger by attracting more members. In the absence of Yusuf, the group moved from the camp and headed northeastwardly, towards Maiduguri, and set up a new camp.
Ali, according to reports, was to meet an untimely death. He was said to have been ambushed by a local vigilante in Borno State and killed.
With the passing a way of Ali, and having just returned, Yusuf took full charge and vowed to avenge the death of his soul mate.
Again, even before he could take full charge, the security agencies came calling.
During a procession, the police attacked members of the sect.
Therefore, when the sect decided to re-group and launch, it was with a vengeance.
Before Yusuf, there was the Maitatsine movement which caused further losses of life in Maiduguri and Kaduna in October 1982 and in Yola in February and March 1984. There is already a thesis which suggests that the porous nature of Nigeria’s northeasterly border may have been the woe of Maiduguri, Borno State capital.
Before his death, Yusuf claimed to have some 3,000 students. His followers were said to include university teachers and students as well as illiterate, jobless youths. They wear long beards, red or black headscarves and refused to use Western-made goods. All those who did not subscribe to the sect’s strict interpretation of Islam were regarded as infidels. This included not only Christians but also the majority of Muslims who follow the moderate Maliki school of Sunni Islam.
Recruitment for membership into Boko Haram is based on indoctrination. The leaders try to persuade people who are willing to join the group. Apart from some of their members who are not Nigerians, the majority of their members are northerners, who are overzealous for Islamic knowledge and they are very secretive about their membership.