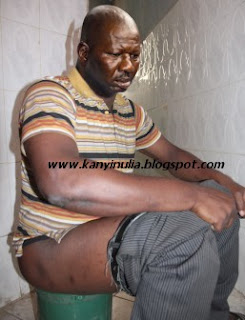 Na waa ooo why will PM NEWS publish this type of picture…..dont this man have a right to his privacy since his still a suspect…anyways if you missed our first story on his ordeal the day he was arrested, click here  pls continue to read the full story.

The National Drug Law Enforcement Agency, NDLEA, may have started singing a new song on why they have detained ace comedian, Baba Suwe, for nine days now, according to an online report published early today.
The report quoted Mitchell Ofoyeju, NDLEA Head of Public Affairs, as saying that the drug suspicion was concocted by the media and not the agency.
“We have never told anybody that he carried drugs in his body. Baba Suwe is under observation just like it has been the case with every other suspected Nigerian passengers, the law is no respecter of anybody, we don’t want to speculate about anything and we will make a comprehensive press conference on the case after we conclude our investigation.

When P.M.NEWS contacted him today on this volte face by the NDLEA, Ofoyeju said: “We reasonably suspect him and we are investigating him. But he is innocent.”
Ofoyeju had issued many press statements in which he said that Baba Suwe was being held on drug suspicion.