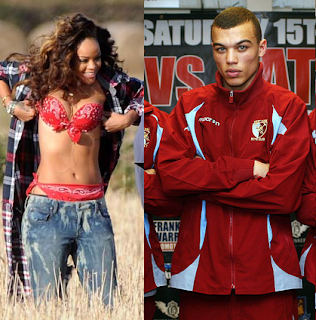 Rihanna has been dealt a blow to the heart by her boxer ­boyfriend… he says he’s too busy to see her. Fighter-turned-model Dudley O’Shaughnessy, 21, said: “My career is my biggest priority right now.”

Man Down singer Rihanna, 23, hand picked Dudley to star in her music video, We Found Love, which was filmed last month in ­Northern Ireland. Since hitting it off, the Bajan superstar has taken him on a string of dates and they have been snapped together with Rihanna shooving her cleavage into his face.

The pair were snapped spilling out of trendy ­London hotspot Mahiki on Thursday night, after her gig at the O2 Arena. Rihanna even asked him to accompany her on her UK arena tour, Loud, but Dudley is not so sure.
At his mom’s home in East London ­yesterday, he told the press: “We had fun ­together, but I don’t know whether I will see her again to be honest.” He added: “I’d like to go to America …but for work.”

What man is turning down some good RihRih poo?? SMH. Dude might be batting for the other team.