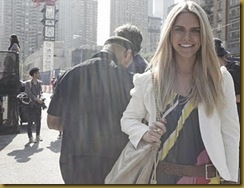 Model and fashion blogger Lauren Scruggs,who had worked in the wardrobe department of Gossip Girl, lost her left hand and suffered severe facial injuries after she accidentally walked into a spinning airplane propeller in Texas on Saturday.

“After exiting a propeller plane, an accident occurred where she walked into the front of the prop,” the post reads. “Struck on the left side of her body, Lauren’s hand, head, and shoulder area were hit.”
‘It appears that the pilot left the engine running at idle while she exited the plane to switch places with another passenger. That’s one of the aspects of the investigation,’ a source told RadarOnline.

The pilot has not yet been identified but he is thought to have been a friend of Lauren’s and recently purchased the plane.