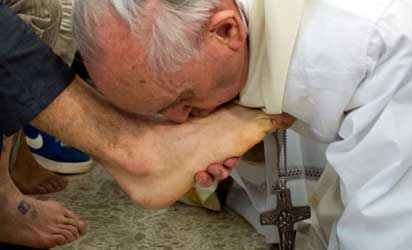 Pope Francis washed the feet of 12 young offenders including two girls and two Muslims at a Rome prison on Thursday in an unprecedented version of an ancient Easter ritual, seen as part of efforts to bring the Catholic Church closer to those in need.
The pope knelt down, washing and kissing the young prisoners’ feet in the first Holy Thursday ceremony of its kind performed by a pontiff in prison, and the first to include women and Muslims.
“Whoever is the most high up must be at the service of others,” Francis said at the mass in the Casal del Marmo youth prison, a fortnight after being elected Latin America’s first pope.
“I do this with all my heart because it is my duty as a priest, as a bishop. I have to be at your service. I love doing it because this is what the Lord has taught me,” the 76-year-old said.
while this was the first time a pope had washed women’s feet, Francis had performed this type of ceremony in his native Argentina many times before becoming pope including in jails, hospitals and old people’s homes….Popes performing the ritual have usually washed the feet of priests. 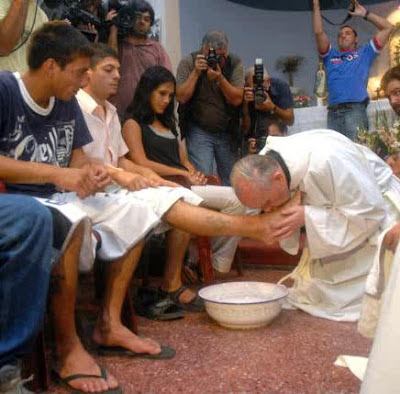