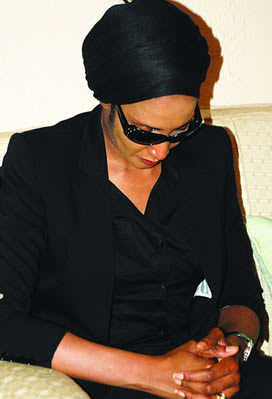 Eleven days after the demise of the former Biafran warlord and leader of the All Progressives Grand Alliance (APGA), Dim Chukwuemeka Odumegwu Ojukwu, his widow, Bianca returned to Enugu yesterday  evening from London, where the husband died.

Dressed in black in reverence to her husband’s death, Bianca who alighted from the Arik aircraft at the Akanu Ibiam International airport at about 5;30p.m. in company of the National Chairman of APGA, Chief Victor Umeh, was received by wife of Anambra State governor, Mrs. Margaret Obi; Umeh’s wife, Speaker of Anambra State House of Assembly, Hon. Chinwe Nwebili, as well as other APGA women.

She, however, could not speak to anxious newsmen as she left the airport after spending about 10 minutes at the Protocol Lounge before heading to their Enugu residence.

Addressing newsmen shortly after, the APGA National chairman said with the return of Bianca, burial plans would not begin, adding however that the remains of the departed Igbo leader would be returned to the country towards the end of January next year.