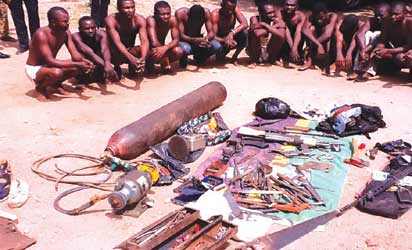 Two months of renewed onslaught against criminals and violent crimes across Benue State by the new Commissioner of Police in charge of the state, Mr. John Haruna has yielded an unprecedented results with the avalanche of arrests of men of the underworld in parts of the state.
The frontal measure against criminals in the State culminated in the arrest of 620 suspects most of who were apprehended with lethal weapons and sophisticated arms and ammunition.
In fact, the ‘Operation Track Them Down’, introduced by the Benue State Police Command which is the biggest and most robust crime bursting operation in the state in recent time, has somewhat driven down the sudden rise in crime waves in Makurdi particularly, and other parts of the state in general.

Parading some of the arrested suspects at the Police Officers’ Mess in Makurdi,the Police Commissioner, Mr. John Haruna noted that the huge success recorded by his men in the last few weeks was a function of the determination of the command under his leadership to effectively tackle the menace of crimes and criminality in the state.

Haruna said, “On assumption of duty here a few weeks ago, I made it quite clear that no crime shall go unpunished during my administration. I equally mapped out strategies for effective policing. Today, I am glad to inform you that these measures have not only yielded positive results but have placed Benue Command amongst the most peaceful and less crime-prone states in the Federation”.
He added, “The measures my officers and I came up with have not only made the security problems to be tackled head-long, but also succeeded in checkmating activities of criminals in the state as a total number of 620 suspects have been arrested since my assumption of duty”, he said.
A breakdown of the number of arrests shows that 300 suspects were arrested in Makurdi Area Command, 165 in Gboko Area Commad and 155 suspects were nabbed at the Otukpo Area Command.

The accomplishment of the Command resulted in the haul of over fifteen AK 47 rifles, a military rifle number 20928, Assault rifles, locally-made AK 47 Magazine, Barrett pistols, live am munitions, Smoke pistols and Brownie pistols.

A breakdown of the accomplishment of the men and officers of the State Command shows that on 22nd January, 2012, men of the Gboko Command acted on a distress call from a robbery victim at Agagu area of Gboko.

Another gang that specializes in robbing innocent victims along the Benue-Taraba boundaries were also arrested by the Command few days ago. The recovery made from the gang include a Military rifle, 20 rounds of live ammunition and a Toyota Corola car with registration number AZ 717 MKD.

The renewed onslaught against violent crimes in the State which was galvanized by the pledge of the Commissioner of Police to institute a reward system in the command also led to the arrest of a notorious gang that specializes in the production and distribution of AK 47 rifles along the Benue-Taraba axis.

The Police Commiss-ioner was visibly shocked by the acumen of the arms manufacturer, one Terheme Sevar, in whose factory were found, one complete AK 47 rifle, two English AK 47 magazines and one locally made AK47 magazine.
Other items recovered from the ‘genius’ were one-locally made Beretta pistol, one Beretta pistol under construction, two AK 47 under construction, four empty shells of Beretta pistol ammunition, two live AK 47 ammunition and several tools for the contraction of arms.

His arrest also led to the arrest of several robbers and other members of the gang who engage in the purchase, transportation and distribution of the finished products.
According to the Benue State Police boss, investigations into the activities of the gang also revealed that “they are responsible for the snatching of arms from policemen in Benue and Taraba states. They are equally responsible in the sponsor of assassinations in the two states as well as other violent crimes especially at the Benue/Taraba border. Two AK47 of the recovered arms were snatched from the Police in Taraba State last December”, he added.

The Police Commissioner who was amazed at the sophistry of the locally-manufactured weapons recovered from the group regretted that the arms manufacturer resorted to deploying his immense talent to aid the perpetration of evil in the state rather than take advantage of the ample opportunities to enlist into the force where his artistry could be put to good use and better appreciated and rewarded by the authorities.

Also in the net of the command are two members of a gang who allegedly robbed and killed one Omemnge Iyav on new year eve at Melaba village in Ukum local government area. Other fleeing members of the gang are still being trailed by the police.

This is just as no fewer than 150 alleged armed cultists were also apprehended in the last few weeks by the command. Amongst them were those who allegedly planned to assassinate a fellow student in Wadata area of the town for refusing to be enlisted into the group. Arms recovered from this gang of cultists includes locally made pistols and other dangerous weapons.

Mr. Haruna further revealed that the operation also recorded a huge success in the arrest of some criminally-minded Chadians, Cameroonians and Nigeriens, 36 of whom were apprehended and handed over to the Immigration Services for investigation and possible repatriation to their various countries.

He also disclosed the arrest of two royal fathers of Mbagwaza and Mbaadeka communities in Ushongo Local Government Area of the State, (names with held), alongside ten others who allegedly fueled the crisis that engulfed the communities, culminating in the gruesome murder of one Onum Ter. While expressing disgust at the key role the royal fathers allegedly played in the carnage, he said, “the traditional rulers incited communal clashes in their areas instead of playing fatherly roles as demanded by tradition”.

Haruna said their actions allegedly led to the death of the deceased and the destruction that trailed the crisis. He stated that all the suspects are currently in Police custody pending the completion of investigations into the matter.
According to him, the Police would soon arraign all the suspects in competent courts to face trial for their actions.
The Police Commissioner warned that the Police would not for any reasons treat with kid gloves any act of criminality in the state irrespective of whosoever is involved.