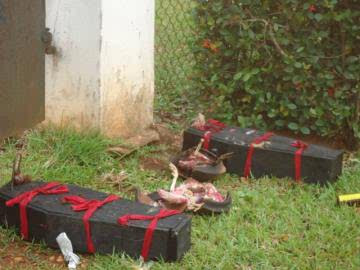 Many staff and students were at the Bursar’s residence to catch a glimpse of the fetish objects.
Red clothings were tied round the coffins and knives were used to pierce the heart of two hens whose inside were torn open.

Dr. Nwoye could not be reached for comments but some occupants at the residence said they were scared.
A Professor in the university who pleaded anonymity described the incident as a ‘serious dimension’, saying that the university community was no longer safe.
“The security used to check for bombs. How come they did not see the people bringing these objects into the university at the dead of the night?” he queried.
When contacted, Public Relation Officer of the institution, Barr. Harris Osarenren said he was not aware of the incident