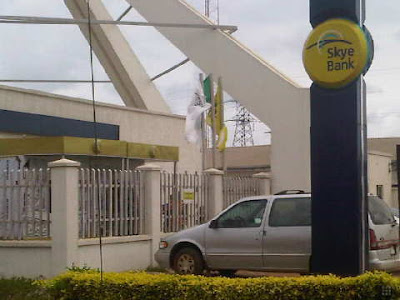 No fewer than six bandits in the wee hours of Sunday raided Skye Bank, Ejigbo branch, Lagos, carting away an unspecified amount of money.
The robbers, said to be armed with AK 47 riffles, scaled the fence of the bank at Orioke, Ejigbo at about 1am and tied up the security guards.

It was learnt that the robbers subsequently broke the wall of the Automated Teller Machine and carted away the money inside. The operation reportedly took two hours as they did not fire a shot to alert security operatives.

According to reports, at the end of the operation, one of the private security guards, reportedly untied himself and contacted management of the bank who consequently reported the robbery to the Police.
Deputy Commissioner of Police in-charge of Operations, Mr. Tunde Sobulo, reportedly led a combined team of the Anti-Robbery Squad and Rapid Response Squad to the scene following a distress call. But the robbers had escaped before they reached the bank.

It was learnt that the private security guards were being detained alongside the owner of a vehicle said to have been parked in front of the bank the previous day. The unidentified owner of the vehicle was said to have surfaced hours after the operation to move his car when he was arrested by the police.