Mrs Sule Imondu, INEC’s Public Relations Officer on Saturday said that the missing INEC ad hoc staff  involved in a boat mishap during the July 14 governorship election had been found.
Imondu told  journalists in Benin that the body of Mr Ekhator Iziegbe was found in Kolokolo village in Edo State. It will be recalled that the accident, which claimed the lives of three policemen and one INEC ad hoc staff, took place in Ologbo River in Edo.
She said, “the family of the deceased just called me to inform the commission that his body has been found in Kolokolo village.
“The family said that the body has decomposed and cannot be taken to the village, hence he has been buried in Kolokolo.’’
Imondu said that INEC had been involved in the search for the body since July 14, “so, we sympathise with the family and pray that God gives them the fortitude to bear the loss.’’
Until his death, Iziegbe was a student of the Ambrose Alli University (AAU), Ekpoma, Edo Sate.
Mr Anthony Airohuoyo, the Edo Police Public Relations Officer, had also confirmed the recovery of Iziegbe’s body at Kolokolo village. (NAN) 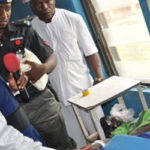