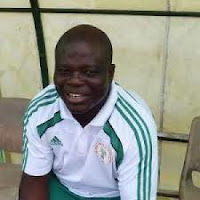 Falconets’ coach Edwin Okon is a man on a mission at the ongoing FIFA
Under-20 women’s Women Cup. He told Sunday Vanguard Sports that his
girls are good for the cup, which they came close to winning two years
back in Germany. He also talked on his relationship with the girls, saying they are like his children and that he would never mess with them….Continue

I
feel good, and the good thing
was that we are in the semifinal and the girls worked according to
instructions, despite losing many scoring chances. But the most
importantly is that we won and are on track to get to the final.Lessons from

the match against Mexico
Like I said earlier, the girls played according to instruction and they
deserved their victory. The pressure was more on the opponents and you
could see how the referee was blowing against us. But that is part of
the game. There are so many lessons to be learned from that match. But
as we prepare for the next match we would correct our mistakes.
On semifinal match against USA

How do you manage your girls?

I’m a principle person and I take my girls like my children and I don’t
think I have any contrary thought towards them. I have not seen a
situation where male coaches sleep with their female player.
I am a married man and I am happy with the wife.Have you ever been accused of sleeping with your girls?

No and may God punish me if I sleep with my girls. Like I said earlier,
they are like my children and I don’t think such thought would ever
cross my mind.