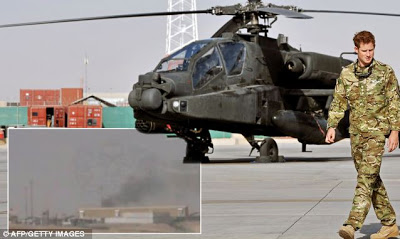 Prince Harry had to be rushed to safety after he was caught ‘just 400 yards’ from a fierce battle when Taliban fighters armed with rocket-propelled grenades burst into Camp Bastion. As the insurgents stormed the base in Helmand province with Harry as their target, the Prince’s armed bodyguards escorted him to a protected area. But despite being so close to the intense three-hour fire-fight – which left two US Marines dead, four British airmen seriously wounded and several aircraft ablaze – the Prince last night told his commanding officers he was ‘staying put’.

Military sources told  said the attack must have been planned days, if not weeks in advance in order to gain access to the heavily fortifed base and get to ‘within 400 yards’ of Harry.
The insurgents are believed to have studied Camp Bastion beforehand and passed unnoticed through vehicle checkpoints before recovering a cache of weapons hidden in the desert….continue reading
At about 10pm local time on Friday, 16 fighters dug beneath a perimeter fence on the camp’s eastern side and ran towards the airfield, where they were challenged by US Marines.
They fired rocket-propelled grenades and rifles, killing the two Marines and destroying aircraft including Harrier jets and Cobra helicopters. At this stage 50 UK and US personnel, including airmen from the RAF Regiment’s Force Protection Wing, were scrambled to the airfield.
The gun battle continued for three hours with the Taliban desperate to reach Harry’s accommodation and a British airstrip where his Apache helicopter was standing idle. The Prince was rushed to safety as the Taliban closed in.
According to Nato coalition chiefs, 15 Taliban were shot dead. The remaining insurgent was wounded and taken to hospital at Camp Bastion where he remains under armed guard.
Last night he was at the centre of a probe into how the enemy breached such tight security and came so close to attacking Harry just a week into his deployment. The four British casualties were also treated for gunshot wounds. Prince Harry climbs up to examine the cockpit of an Apache helicopter with a member of his squadron at Camp Bastion near to where the attack happened
A military source said: ‘This was a very well planned and executed attack. The logistics involved in order to get inside a base with heavy weapons takes a lot of working out. So this is not something they just dreamed up in the space of a few hours.
‘From our point of view we do not know they are enemy until they take hostile action. They knew that and took precautions, reaching the fence surrounding Camp Bastion with their weapons concealed.
‘The investigation into the attack will look at whether the insurgents belonged to the Afghan National Army. But if they were ANA they would probably have chosen a different method of entry to Camp Bastion.
‘When the attack began Harry was with the other Apache crew members. He was not training, this was during his down-time.
‘He was accompanied by protection officers. Harry was carrying a loaded weapon, so was every member of personnel at Camp Bastion. This is a new security procedure adopted earlier this year. A number of incidents led us to raise the security profile. Pilot: Harry is trained to fly Apache helicopters, some of the most deadly aircraft in Afghanistan
‘
He was not in danger and he resumed his training on Saturday as planned. He is fine and will not be going anywhere.
‘All the US aircraft were aligned along the eastern side of the runway, in the area where the Taliban force chose to enter the base. Many of these were destroyed in the attack, including transport and attack helicopters. The gunmen then moved towards the hangars and passenger handling areas on the western side of the runway.
‘The British aircraft and helicopters are stored on a separate flight line with its own perimeter. Here the enemy were intercepted by RAF Regiment personnel. They killed plenty of the gunmen but casualties were sustained.’
Harry met with colleagues from 662 Squadron, 3 Regiment Army  Air Corps after the engagement. He is expected to conduct his first operational missions as an Apache pilot this week.
The mood at Camp Bastion was said to be ‘doubly sombre’ last night in the aftermath of the attack on the base and the latest British fatality of the campaign. A soldier from 1st Battalion, the Grenadier Guards, was killed on Friday by a roadside bomb in Nahr-e Saraj in Helmand. Base: Camp Bastion is the British headquarters in Helmand province (file photo) Assault: The attack on the base, pictured, was described as ‘sustained’ and ‘complex’ by U.S. officials
Harry is due to remain at Camp Bastion until January. The base is located in a remote desert area north-west of Lashkar Gah, the capital of Helmand. It is the hub for all British operations in the province and, along with Camp Leatherneck, houses thousands of combat troops and Marines, including Danish and Estonian forces.
Afghanistan’s southern region has been a hotbed of the insurgency and attacks against foreign forces happen daily. Helmand remains an active battlefield between insurgents and Nato forces and for years has been the site of some of the war’s bloodiest engagements.
Tory MP Colonel Bob Stewart, a former commander of British troops in Bosnia, said he did not think the Prince should be pulled out of Afghanistan because of the attack.
‘To hell with them,’ he said. ‘Harry wants to go there and our soldiers want him there. He should stay.’
The Ministry of Defence insisted Harry was never in danger and claimed the attack was thwarted 1,000 yards from his accommodation. The MoD said: ‘The threat to all our service personnel is continually assessed and all measures taken to mitigate it.
‘As we stated last week, the deployment of Captain Wales has been long planned and the threat to him and others around him thoroughly assessed.’
Meanwhile, the Afghan government has indefinitely blocked YouTube to prevent its citizens seeing a clip of the controversial US-made film, 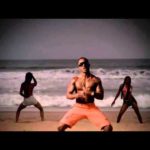 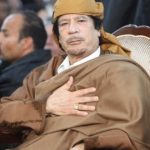