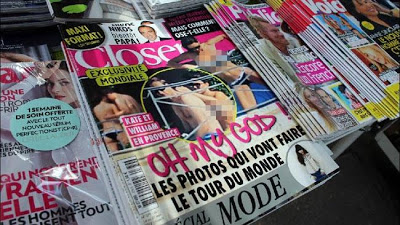 Prince William and his wife Kate have launched a legal action for breach of privacy against the publishers of France’s Closer magazine after it printed topless pictures of her on holiday.
St James’s Palace said the publication of the photos was reminiscent of the “worst excesses of the press and paparazzi during the life of Diana, Princess of Wales”.
The front page shows the Duchess of Cambridge topless on the terrace of a private house in France, where she was staying with William last week. Inside the magazine there are further pictures, taken with a long lens, of her sunbathing topless. To see the photos click HERE meanwhile click read more below to continue reading
Prince William and Kate were said to have reacted with “anger and disbelief” and thought a “red line has been crossed”.
The palace said: “Their Royal Highnesses have been hugely saddened to learn that a French publication and a photographer have invaded their privacy in such a grotesque and totally unjustifiable manner.
“The incident is reminiscent of the worst excesses of the press and paparazzi during the life of Diana, Princess of Wales, and all the more upsetting to the Duke and Duchess for being so.
“Their Royal Highnesses had every expectation of privacy in the remote house. It is unthinkable that anyone should take such photographs, let alone publish them.”
The palace earlier said it was consulting French lawyers.
The magazine’s French website shows a pixellated photograph of the Duchess in a bikini apparently removing her top.
In an interview, Closer’s editor Laurence Pieau defended the decision to print the photos and said she did not think the photos were “shocking”.
She said she thought the reaction had been “disproportionate”.
“Two weeks ago, there were the pictures of Prince Harry that had been published by the English press. So one shouldn’t be hypocritical. And those were pictures that were degrading and far more hot than those that we’re publishing.
“She’s a topless princess. There have been others. It’s really not new.
“We’re in the celebrity press business and we know that these images are full of joy, not degrading and concern a princess who is pretty and is making the whole world dream.”
Ms Pieau said they had been given even more intimate photos they had decided not to publish.
The magazine article states: “See incredible images of the future queen of England like you’ve never seen her before … and like you’ll never see again.”

The chateau where the pair were staying. Pic: chateaudautet.com

It went on: “Kate perfected her tan and smothered her nymph-like body with factor-50 sunscreen while William played on his tablet computer. And to avoid tan lines, Kate thought of everything … and took off her swimsuit.”
The pictures were taken while the Duke and Duchess were staying in Provence at a chateau owned by Lord Linley, the Queen’s nephew.
The couple, who are currently visiting parts of southeast Asia and the South Pacific for a Diamond Jubilee tour, were told about the pictures just ahead of a stop at a mosque in Kuala Lumpur, Malaysia.
She appeared unfazed during the visit as news of the pictures spread around the world.
She later looked relaxed and smiled and waved at Malaysians who had gathered to see her at a park in the capital.
She stopped, chatted and joked with her husband as they made their way on foot towards a conference centre where the Duke delivered his first speech in the country.
Malaysia is a largely Muslim country with laws on public decency, making the timing of the pictures’ emergence even more difficult.
The palace said once they had a break in their schedule the couple would “turn their minds to what, if any, action they wish to take”.

Kate pictured at a dinner during the visit to Malaysia

The couple’s next stop is Kota Kinabalu, capital of the state of Sabah on Borneo.
The pictures have not been published in Britain, but the Daily Mirror and Sunday Mirror confirmed they were offered pictures of the Duchess wearing a bikini on the same balcony a week ago.
The papers’ editor Lloyd Embley said: “As with the naked pictures of Prince Harry in a private hotel room, we took the decision not to publish them.
“In both cases we believed there would be a clear breach of the Press Complaints Commission’s Editors’ Code of Practice, regarding intrusion of privacy.”
Publication of the images in France has revived the privacy row prompted by the images of Prince Harry frolicking nude at a Las Vegas hotel.
The Sun was the only British newspaper to defy advice from the Press Complaints Commission not to publish those photos of the naked prince with an unnamed woman.
The tabloid’s editor Dominic Mohan confirmed the paper would not publish the topless pictures of Kate that appeared in Closer.
He said: “The Sun has no intention of breaching the royal couple’s privacy. The circumstances are very different to those relating to the photos of Prince Harry in Las Vegas.
“Prince Harry was at a party with a large group of strangers – one of whom released a photo into the public domain.”
The French edition of Closer magazine is published by a different company to the British edition.
In a statement Closer magazine UK said it “would never publish topless images of a member of the Royal family on its cover or otherwise”.
The chief executive of the publisher of the UK’s Closer said the company had “complained in the strongest terms” to the firm which licensed the title in France.
Paul Keenan of Bauer Media said his company deplored the publication of the “intrusive and offensive pictures”. And he said Bauer had asked Closer France to remove the pictures and refrain from publishing any more of the images. 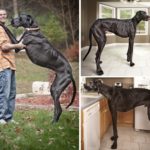