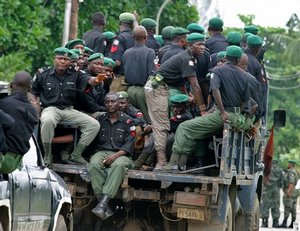 The Ekiti State Police Command has rescued a lady, Comfort Kacha, from ritual killers who attempted to cut off her head in a hotel in Ado-Ekiti, the state capital.

The Police Public Relations Officer in the state, Mr. Victor Babayemi, in a statement on Friday, said the suspect, Ayodele Jinadu, was arrested for alleged attempt to decapitate his victim who he had lured to a hotel…..continue

The PPRO said the victim who had machete cuts all over her body was rescued and taken to the hospital where she was treated.

Jinadu said the suspect confessed to the police that he was sent by a man who needed the head for ritual purposes.

The statement read in part, “Operatives of the Ekiti command arrested Jinadu, 30, who lives at No. 8, Eleguru Street, Ado-Ekiti, for attempting to take Kacha’s life. The suspect was arrested on December 19 at Sharp Corner Hotel, Ado-Ekiti, where he inflicted severe machete cuts on the victim.

“During interrogation, he confessed that he was sent by a man at Ikere to bring a human head for rituals. His confession led to the arrest of his accomplices, Seun Ariyo, 28, and Tope Bebere, 35, both of Ikere-Ekiti.