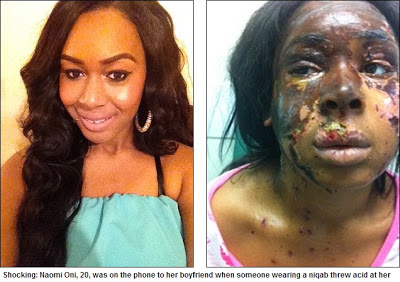 A Nigerian girl, Naomi Oni was scarred for life when a mysterious figure wearing a muslim niqab threw acid in her face as she walked home from work. She has no idea who did this to her and has spent the past month having skin grafts and almost went blind, although she has now recovered her vision in her left eye and has partial sight in her right.
To make matters worse, she is the sole carer for her disabled mother Marian Yalekhue who is 52. She told her story;
‘I’d been working a late shift and was talking to my boyfriend about what we were going to do for New Year when I saw this Muslim woman wearing a niqab covering her face,’ she told the Evening Standard.
‘I thought it was a bit strange at that time of night, but she didn’t say anything and I kept on walking.
‘Then I felt a splash on my face. It burned and I screamed out. I started running and screaming, holding my face, all the way home. I didn’t look back. 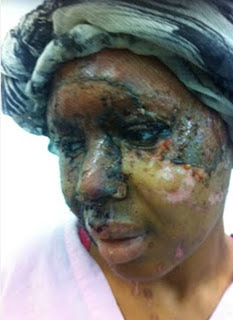 ‘I got home and I was screaming and banging on the door. I was hysterical. Luckily my godmother, who is a pharmacist, was at home with my mum and she helped me and kept dipping my face in water and trying to calm me down until the police and ambulance got there.
‘I was in shock. Saying: “Who would do that? Who would do that?” How could anyone do this?’.
She has released the shocking images of her disfigured face in an appeal for help to catch the attacker whose identity was concealed behind the Muslim women’s dress which completely covers the face apart from the eyes.
Ms Oni decided to speak out after police failed to establish any motive behind the December 30 attack or identify a suspect.
She said the attack had ‘destroyed’ her life and left her too afraid to venture out or even show her face in public.
‘I look in the mirror and it just isn’t me. I’ll never look the same again,’ she said. ‘I’ve always been outgoing and confident in my job and in my personal life, used to getting attention for the way I dress or my hair, but now I don’t want anyone looking at me.
‘I don’t want people to see me in public. I don’t want to get the Tube or the bus. If I have to go to the hospital I take a taxi. 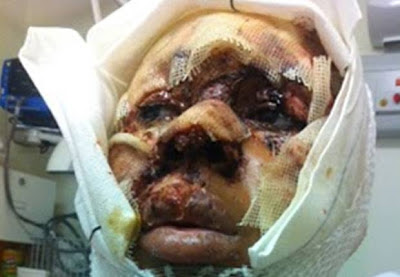 ‘I don’t know if I’ll ever be able to go back to my job. I was planning to go to college in September to study media and fashion, but I don’t even know if I’ll be able to do that.’
The store assistant has been told she faces months if not years of skin grafts and further plastic surgery and even then is likely to be left with severe facial scarring.
She and her mother say they are too afraid to go back to their council flat in Dagenham. They are currently sleeping on a friend’s sofa-bed after turning down the offer to be rehoused in Tottenham on safety grounds.
Ms Oni said she had been inspired by the story of Katie Piper, the model who launched a charity and spoke out publicly after falling victim to an acid attack orchestrated by her boyfriend, but that she would never feel safe with her attacker still at large.
‘Even with the support of my family and friends and boyfriend I feel very alone,’ she said. ‘Nothing is going to be same anymore.