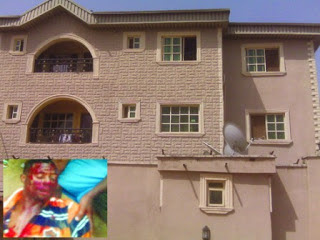 A young man, Ejike Igwekile, has been thrown down from a two-storey building at Okota, Lagos by his angry in-laws at Okota, Lagos State, southwest Nigeria.
Ejike’s sin is that he allegedly beat his wife, Nkiru, 27, from Delta State, south-south Nigeria, and she ran away with their only daughter to her parents’ house at Orile Coker, Lagos, barely a year after they got married.
According to Igwekile, who is from Okija in Anambra State, southeast Nigeria, sometime this year they had a little quarrel and Nkiru took their only daughter to her parents’ house when he left for his business. He said trouble started when their baby fell sick and his wife phoned him to bring money so that she could take her to a hospital for treatment.
He said he ignored them and insisted that Nkiru should come back to his house with the baby so that he would take her to a hospital.
After he refused to send the money, his mother in-law, Patricia Philip, 53, allegedly went to Ejike’s house at Okota to pack her daughter’s property to end the marriage.
He said when he resisted, Patricia immediately contacted her son, Charles who allegedly came with two other suspects and descended him, beat him mercilessly after which they threw him down the two-storey building.
Although he survived the fall, he was rushed to a hospital where he is being treated.
He broke his head and legs and cannot walk properly as a result of injuries he sustained during the fall. Patricia was arrested by the police at Okota division and charged to court, while Charles and the two other accomplices are on the run.
Patricia denied the allegation and told the police that it was during the scuffle that Igwekile jumped and fell from the building.
She was charged with conspiracy and attempted murder under the Criminal Code, before the presiding Magistrate.
When she was arraigned, she pleaded not guilty to the charge. The court granted her bail in the sum of N250,000 with two sureties in like sum. She was remanded in prison custody pending when she will fulfill her bail condition.
The matter was adjourned till 11 April, 2013.
Source: sunnewsonline.net