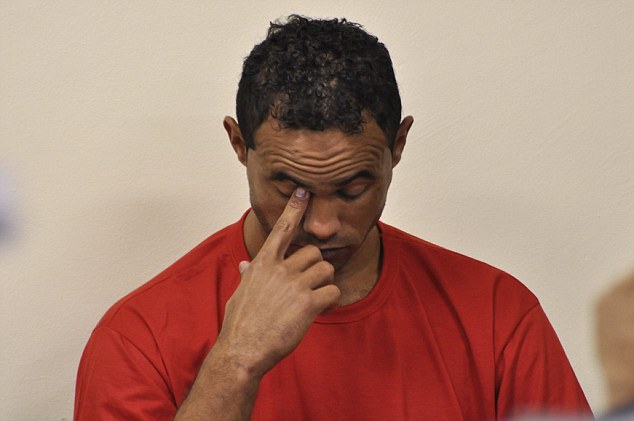 A star Brazilian footballer has been jailed for more than two decades for ordering the kidnap and murder of his girlfriend, who was dismembered and fed to his pet dogs.
Bruno Fernandes de Souza, 28, who was tipped to play for Brazil at the 2014 World Cup, and was to be transferred to AC Milan for a Million Pounds was sentenced to 22 years and three months in prison for the murder of Eliza Samudio, whom he apparently had killed to avoid paying child support after she gave birth to his love child….He was arrested last year HERE for kidnapping her and he admitted to the crime last week HERE.
Judge Marixa Fabiane Rodrigues said the goalkeeper, who played for Brazil’s biggest team Flamengo, had ‘meticulously calculated’ Ms Samudio’s execution.
He told the court in Contagem, south-east Brazil, that the footballer was ‘twisted’ and had ‘instilled in his personality a total misunderstanding of values.’
He added: ‘Bruno believed that, by making the body disappear, he could ensure total impunity.’
The former player had previously denied any knowledge of what happened to the 25-year-old, but told a court this week how his best friend Luiz Henrique Romao had paid someone to kill her. 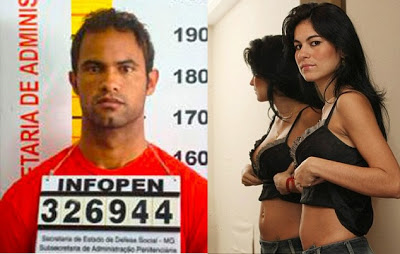 He admitted that although he hadn’t ordered his former lover to be killed, he had ‘accepted’ it.
The goalkeeper is accused of planning Ms Samudio’s abduction and murder with eight others including his wife Dayane, another former lover, a cousin and former policeman Marcos Santos.
But he told the court in Contagem that his cousin, Jorge Rosa, who had witnessed the murder, had told him what had happened.
He claimed that after kidnapping Ms Samudio, Romao had taken her to a house in Belo Horizonte where hired killer Santos was waiting.
He said: ‘There he held her hands and asked [Romao] to tie them in front of her, and put a tie around her neck.
‘And [Romao] even kicked Eliza’s legs away. That’s what Jorge told me. And that they had chopped up her body, that they had thrown her body for the dogs to eat.’
The former star admitted that he feels ‘guilty’ for her death despite instisting that he never oredered the killing.
Ms Samudio, who had previously claimed to have had an affair with Real Madrid ace Cristiano Ronaldo, met Bruno at a footballers’ party in May 2009 and fell pregnant by accident, it is claimed.
The goalkeeper demanded she have an abortion but she went ahead with the pregnancy, instead insisting that he assume paternity of the child.
Before her disappearance on June 4, 2010, Ms Samudio had approached police claiming she had been held captive by Bruno and his associates, who forced her to take an illegal abortion drug.
Bruno allegedly put a gun to her head and told her: ‘You don’t know who I am or what I’m capable of – I’m from the favela.’
The baby, Bruninho, was born in February 2010, but the player refused to acknowledge he was the father.
Prosecutors allege that Bruno ordered Ms Samudio’s murder after she told him she would take legal action to force him to pay child support.
In a statement to police, the footballer’s teenage cousin Jorge Rosa claimed he and Romao picked up Ms Samudio and her son from a Rio de Janeiro hotel after she accepted an invitation by the footballer to talk about the paternity claims.
He said they drove her 220 miles to a property in Belo Horizonte which Bruno and his wife used as a weekend retreat, where she was held captive for six days.
Ms Samudio was then allegedly handed over to former military policeman Santos, who committed ‘barbaric tortures’ on her before strangling her to death with a neck tie in front of her four-month-old son.
Santos, who was allegedly paid £8,000 to murder her, played loud music on a stereo to drown out the woman’s screams, it is claimed.
Edson Moreira, a detective who investigated the case, said: ‘His acts were almost impossible to describe without breaking down – images from the worst nightmare you could imagine.’
Police later found Ms Samudio’s four-month-old baby in a Belo Horizonte slum, alleged to have been abandoned there by Bruno’s wife Dayane. DNA tests later proved the footballer’s paternity.
The child is now being looked after by Ms Samudio’s mother.
Bruno’s trial, which began on Monday, is expected to conclude today. If found guilty he could be jailed for up to 41 years. 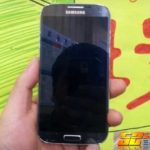