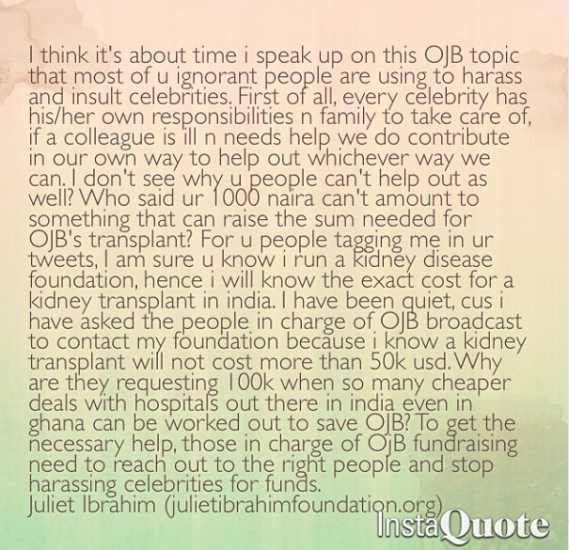 Juliet Ibrahim earlier yesterday made some very controversial statement consigning popular Nigerian producer OJB Jezreel’s fundraising for his Kidney problems.
The sexy Ghanian actress came under negative criticism from fans after she made used her instagramm to release statements telling OJB’s handler to reach out to the right people and stop harrasing the clebrities for fund. (Read above)
In a fresh statement hastily released by her media manager, Juliet cries out that her words were misunderstood.

“I don’t mean for my tweets to be misconstrued and I won’t take OJB’s health problems with levity as many have misconstrued me…all I was trying to do was bring an idea of where we can get the transplant done since it’s utmost necessary we get it done soonest and funds ain’t coming in as much expected.

I thought we could try a better and certified centre which isn’t as expensive as the current one in UK when there are several cheaper countries to perform the surgery. Also instead of people lashing out on celebrities, they should rather be asking the government to help.

“It should be further noted that we are all finding a lasting solution to help end the pain of the talented entertainer and bring smile to his face once again and not generate issue out of someone’s suggestion or hand of help,” She stated further ““Currently I have 2 relatives living with kidney failure whom I’m responsible for and caring for, thus, I’m no stranger to whatever OJB is going through.”