“Yes we starred in a particular movie and a movie is a movie. It is make believe so whatever you saw in the movie is make believe. We did it that way to show people that things like this happen but it doesn’t mean it really happened.”

Nikki stressed that the rumours started after the movie release, while there was nothing actually going between the two.

“I never dated Jim Iyke and I never had séx with Jim Iyke. I haven’t done anything like that with him, whatever I have done with Jim Iyke is strictly business so what you see us doing in the movie is make believe”.

Peep the movie trailer when you continue…but sorry to burst your bubble, you wont see no badt thing lol…..

Commenting on her part in the video, she said that most of her family members, friends and even the media felt disappointed when they saw the piece.

This was because they thought it was a private affair which has been recorded and leaked on the internet but she tried to explain to those who complained to her that it was just a scene from a movie.

The movie titled “My first wife” raised a lot of controversies after it was released some years back with critics bemoaning how Nikki allowed the Nollywood actor to fondle her body and the extent of exposure all in the name of acting. 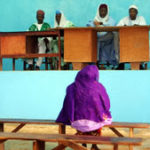