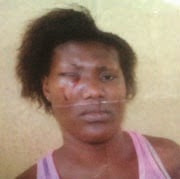 Amaka was seriously injured in her right eye when she was allegedly beaten up by Kingsley at a beauty salon. She said after undergoing several operations, the doctors at Apapa General Hospital confirmed that she cannot see with the eye again.

Following the assault, the police at Area ‘B’ Apapa arrested Kingsley and charged him with assault before Apapa Magistrate’s Court after which he was remanded in Kirikiri Prisons in Lagos State, southwest Nigeria.
Both Amaka and Kingsley, who is still single, admitted that they were friends but Amaka said they were just friends not lovers.

She said she stopped relating with Kingsley when she discovered that he was desperate to have sex with her despite the fact that he knew that she was married and had two kids.

She said after several attempts by him to sleep with her failed, he became aggressive and when she noticed that, she started avoiding him.

Amaka said Kingsley eventually traced her to a salon at Pen Crescent, Apapa, Lagos where she went to have her hair done and attacked her in front of the beauty shop.

“He waited for me outside the salon. When he saw me, he started abusing me after I refused his advances. I replied him and he hit my eye and threw me on the floor. He started  hitting his head on my eyes until I started bleeding,” she told the court.

Amaka said it was their neighbours who came to her rescue and took her to the hospital, while Kingsley immediately started his motorcycle and rode off after attacking her.

She alleged that after the attack, Kingsley boasted that nothing would happen to him because he has money to bail himself out of any difficult situation.

Amaka reported the case to the police but alleged that she was asked to collect N30,000 for her eye operation in order to settle the matter out of court.

Amaka said she had spent over N200,000 on the surgeries but they were not successful.

She called on the state government to come to her aid and ensure justice was done in the matter. Meanwhile, when Kingsley was contacted, he admitted attacking Amaka but said he wanted to settle the matter out of court but she refused.

When he was arraigned, he pleaded not guilty. The presiding magistrate, Mrs O.A Adegbite, granted him bail in the sum of N50,000 with two sureties in like sum.

He was, however, remanded in prison custody pending when he will fulfill his bail conditions. The matter was adjourned till 24 March.

Video Of What Started The Stampede At The Immigration Recruitment Test