Am sure most of you watched President Goodluck Jonathan daughter;s wedding…It was broadcasted live on some TV stations…If you didn’t, stay tuned i’ll post the pictures soon. Meanwhile read a review of the wedding by Charles Novia below’;

I just attended the wedding reception of President’s Jonathan’s daughter, Faith and her husband, Godswill.
Let me just give a slice of it; all these big men you guys see in power and out of it are all hustlers like you and me! The rush to enter the hall, ehn? Captains of industries and Government officials were in a flux and fight to enter the hall which was barricaded by stern security men at the International Conference Centre.

The protocol is that once the President enters the hall; the doors are shut and no one gets in or out till the President leaves. So, there was a scramble to enter. Me sef shame for some people. Chai!
There were rumpled and creased clothes on people after the scamble. A couple of ladies lost their headscarves and headties and gave us shocking glimpses of their ‘Abolo’ heads! Chai!
The President’s Security detail at the venue were stern but professional. They didn’t give a hoot who you were. Orders are orders.
Everyone who entered; those that mattered wanted to be seen by the President or First Lady and a small line of diffident favour-seekers or friends was formed but many could not pass through the security detail to just greet Mr President.
Let me shock you guys a bit. The biggest critics of President Jonathan, the opposition parties or cliques, the rabble-rousers and all were mostly there at the wedding! I was shocked! Ehn! Politicians! That’s how they deceive you all by crying wolf and abusing the President yet they run to him to prostrate at night or in private!
Those of you who follow blindly these people una go see! Be careful!
I even saw Dele Momodu, who lambasts President Jonathan every week for the past four years on Thisday backpage on Saturday, taking pictures and going round shaking hands. He shook my hands too. Egbon! Look, in politics there are no permanent friends or enemies: just permanent interests!
I must hand it to GEJ, he shielded his family from public glare. I mean; how many of us know he has three biological children and three adopted with this new bride being an adopted child he took in about 15 years ago? Very touching.
The couple got gifts of over 60 brand new cars as presents from what a close source told me. ‘Bastardly rich’ Nigerians fell over themselves to give presents. Chai!
There was a group of orange-scarved women who caused a stampede in the hall after the wedding rushing for gifts and stuff! Wetin? People nor get shame?
The presents given to the guests were magnifique! Not anything ostentatious but just cool.
This Nigeria is great, sha! Odiegwu! 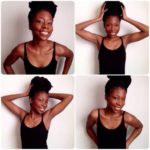