Menu
A man who lodged in a well known hotel in America caught one of the hotel cleaners going through his property via his laptop camera.

The holidaymaker decided to leave his laptop camera recording after he left his room at an unidentified U.S. hotel which he described as ‘brand-named’.

The video later revealed a housekeeper rifling through the guest’s suitcase and trying to access his laptop computer.

The shocking footage, posted on YouTube by user Vince Stravix, has already had more than two million views.

‘This happened on the 5th of November, 2014. I was staying at a … hotel and I kept all of my items laid out in my room. Not anymore though.’

‘Keep you’re items hidden in the trunk of a car or at least hidden from view!’ 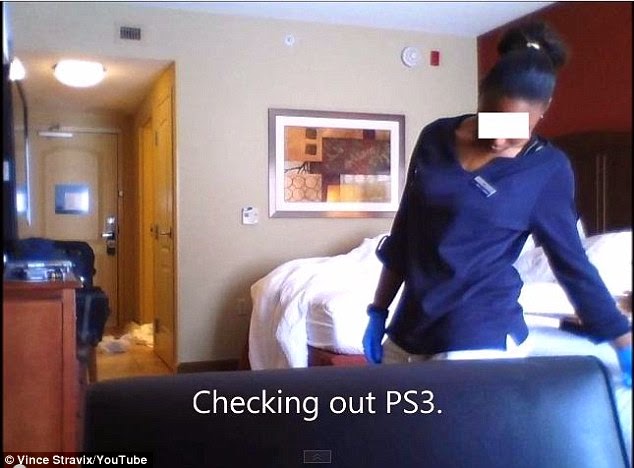 The video begins innocuously enough; the woman enters the room, wanders into the bathroom, and collects the dirty towels into a pile.

As well as giving the TV a dust down, cleaning the bathroom and changing the sheets, the housekeeper began digging through the guest’s personal belongings.

The woman had a close look at a package that the guest had delivered before moving on to examine his games console, a PS3, and the games with it.

Apparently unaware that she was being filmed, the housekeeper then has a close look at the laptop, coming full-face in front of the camera, before turning her attention to a tablet device.

Then she turns her attention to making the bed – but it’s not long before she is drawn to the contents inside the guest’s suitcase. 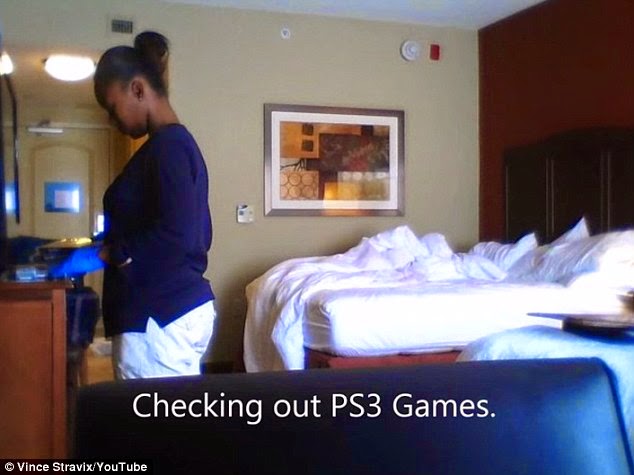 It’s then back to the laptop, with Stravix claiming she tried to input some information.

The bed is then made, the bathroom sprayed, and the cleaner makes her exit after taking in more than the guest bargained for.

Mr Stravix later added some more comments on the video he posted online which drew hundreds of responses from viewers.

He refused to identify the hotel brand or the location, writing: ‘This video was not uploaded to incite a witch-hunt or a boycott. Employees are never 100% controllable and they never will be because people are not robots.’

He added that hotel management received all of the uncut footage that he had taken. 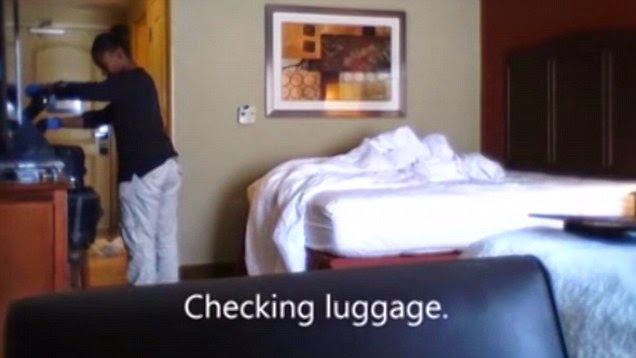 Mr Stravix wrote the purpose of his video was to make people aware what goes on in hotels when you are not around.

He said: ‘Making people aware that even in a hotel room someone could rifle through your things without you knowing, so password protect everything you own and keep valuables locked up.’

Herbert the Hippy said: ‘That’s why I don’t stay in hotels’, while Brad Lewis adds: ‘Don’t be a victim. Mind your property in hotels.’

Marinus Schunck said: ‘This is exactly why I never have room service enter my room, I simply ask for new towels outside the room and just learned you can tell the front desk you don’t want entry into your room the entire time you’re there and they must comply, security couldn’t even enter your room.’

Respeexy commented on YouTube: ‘I don’t think its that much of a big deal.
‘They are not stealing things, they just want to use it for a moment, again they shouldn’t use your stuff but really nothing much happened here.’

And Gorgio Reel added: ‘What I see is a curious lady looking without wrong intentions at items that she probably could not afford.’

Others pointed out that the housekeeper had cleaned the bathroom and then made the bed while wearing the same pair of gloves.