Menu
Nigeria’s king of comedy, Ali Baba, clocked 50 during the week and the humour merchant celebrated the day with fanfare. And since a lot of younger comedians have come after him, Ali Baba said he is not in any way, threatened by them since he said some of them depend on him for jokes.

“Why should I be threatened by them? how would I be giving them jokes? If I were, I won’t give them my jokes, and I would tell them not to use my jokes. I make jokes and give to some of them. So, there is nothing like being threatened by them. The bottom line is that the day you begin to feel threatened by some other up-and-coming comedians, then you are on your way out. You’re supposed to be somebody they look up to, not somebody they compete with,” he said.

Looking back at his life, Ali Baba said there are a lot of things he should have done now that he is 50 that he didn’t do, adding that there are people who have not lived up to 30 years and have done a lot more than he has done.

“There are several comedians whose lives I should have stepped into and turned around. There was a time that I was giving cars to some comedians and a few other comedians said I was trying to buy the favour of those comedians. So, I withdrew from doing that. Some people were uncomfortable that I was paying some comedians’ house rent and making it look like I left other people that needed help. So, I pulled out. And over the years, I found out that those interventions that I was doing at that time made some of them even become as big as they are. So, I have thought about it deeply and I feel that those are some of the things that I should still have kept on doing and it would have grown the industry greatly.”

“I need to do it, which is one of the reasons why I started spontaneity. I think there are a lot of comedians who need support, not because they can’t stand on their own but because they need a little prep. Some of them need networking, some need visibility and these days, it’s easy to find some other established comedians, instead of providing platforms for the young ones competing with them to use those platforms, but you still find some people who also yield their platforms to these young comedians.”

No matter his age, Ali Baba said he is not ready to quit comedy.

“What happens is that you step into a particular class and you do selective events, so you are not available for everything and anything, like going to perform at somebody’s birthday ceremony at Ogudu and from there to Ogba to perform at another naming ceremony. No. You leave some certain places for people. That’s why there are certain platforms where you will not find me anymore. It’s just like being a Senior Advocate of Nigeria. When you become one, you won’t be a ‘charge and bail’ lawyer anymore. That’s how it is,” he said

Meanwhile for his birthday, Alibaba’s wife gave him a Mercedes Benz 500…. 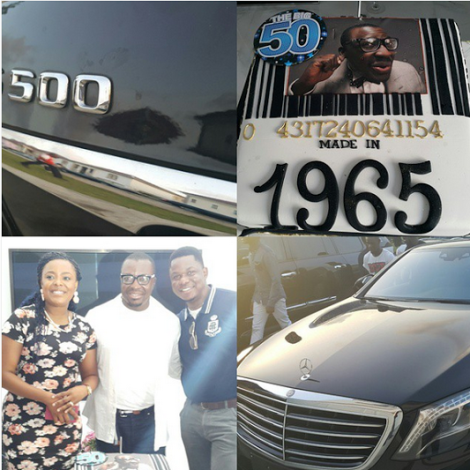 Wishing him a happy birthday in arrears……