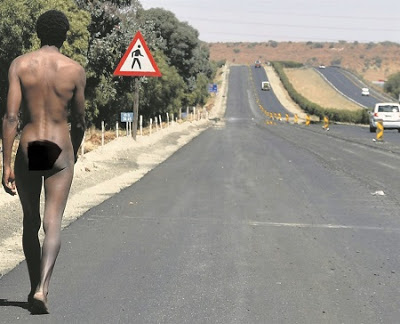 Daily Sun SA reports that several motorists hooted as they passed the n*ked man walking along the highway. But the man continued to walk down the road in Bloemfontein, South Africa, without a care in the world.

He switched from one lane to another while heading towards Colesberg on Friday.

However, he was soon nabbed by cops after newsmen called for help.

When police arrived, he changed to the oncoming lane and played cat and mouse games before being caught by the cops.

The man did not say anything when construction workers nearby insulted him.

One of the workers shouted: “You fool!  You are embarrassing us when you walk around like that.

“Who did you anger? You must apologise to them so this spell can be reversed.

“You are lucky to be under police guard. We would have taught you a lesson if they weren’t here.”

At first the construction workers thought the man was mute, but he started to talk when the cops arrived.

“I am not crazy. Leave me alone. I just want to reach my destination!” he said.

“We will investigate where he comes from. No case was opened.” 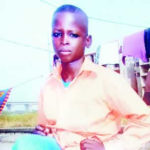 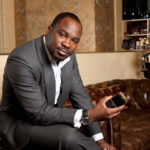