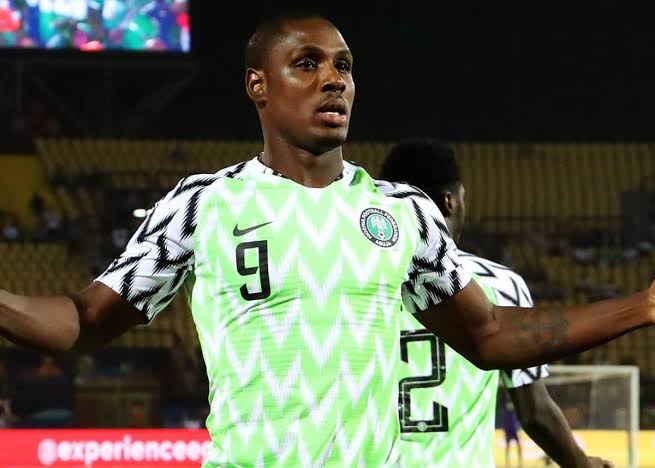 Odion Ighalo boosted his chances of winning the Golden Boot at the Africa Cup of Nations (AFCON) on Wednesday after he netted Nigeria’s winner to ensure his side third place in the tournament with a 1-0 victory over Tunisia.

The 30-year-old Shanghai Shenhua forward struck the only goal of the match just 130 seconds after the kick-off before a small crowd at the Al Salam Stadium in Cairo.

It was his fifth goal at the tournament and pu5s him two ahead of closest rivals Riyad Mahrez, Adam Ounas, Cedric Bakambu and Sadio Mane, who have three goals each.

Algerians Mahrez and Ounas and Senegal’s Mane have a chance to increase their totals when the two countries face off in Friday’s final at the Cairo International Stadium.

After Sunday’s semi-final losses, Tunisia and Nigeria wanted the bronze medal. But it was Gernot Rohr’s side that prevailed in the third place contest in Cairo.

Nigeria shot into the lead barely three minutes into the game as Ighalo tucked home the ball after Ben Cherifia and Meriah made a mess of Jamilu Collins’ cross.

The Carthage Eagles responded well and would have gotten a quick equaliser had Ferjani Sassi’s header not been cleared off the line.

Ighalo who has five goals to his name was forced out few minutes to the end at half-time.

The China based striker appeared to have suffered a hamstring injury.

Tunisia started brightly in the second half and Whabi Khazri’s superb throughball put Chaouat through on goal a minute after the restart. But with only the goalkeeper to beat, Tunisia’s substitute lashed into the side netting.

Thereafter Samuel Chukwueze’s long-range strike looked to be creeping in just after the hour, but Ben Cherifia made a superb save at full stretch.

The introduction of Samuel Kalu also gave Eagles the edge as he forced two saves from the goal keeper with his dead balls.

With the time tickling away, Ghilane Chaalali bundled himself into shooting range as full-time approached, though a weak effort wide of the upright was all he could muster as Tunisia ended their tournament without a medal.