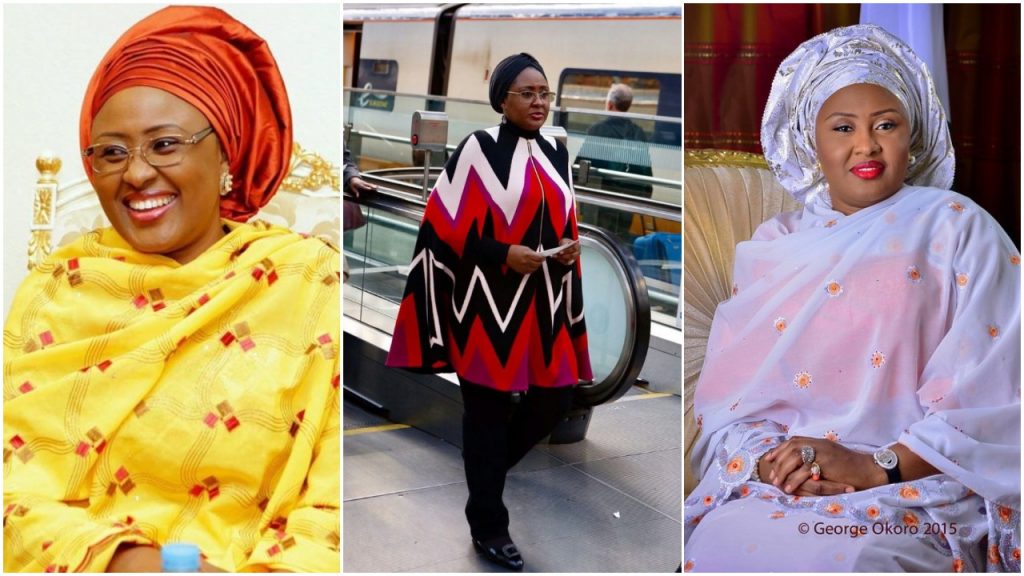 Fatima Abdulmutallib, the daughter of President Muhammadu Buhari’s uncle, Mamman Daura has accused the wife of the president, Aisha Buhari, of ‘violently’ attacking them inside the presidential villa in Abuja.

Fatima made this accusation while admitting that she took the now-viral video that shows Aisha Buhari shouting at them and complaining about being denied access to her apartment.

KanyiDaily had reported about the video which trended on Friday while rumour was circulating that President Buhari was getting married to Sadiya Umaru Farouq, minister of humanitarian affairs, disaster management and social development.

In the video, the first lady who was visibly furious, was seen speaking in anger about being denied access into a section of the Aso Rock

Mrs. Abdulmutallib, who opened up about the video during an interview with BBC Hausa Service on Monday morning, said she least expected Buhari’s wife to act in a violent manner.

Stating the reason for taking the video, Mrs Abdulmutallib said “I only wanted to use it as evidence because she was just screaming and insulting us for reasons best known to her.”

She, however, said the video was not recent as she took it three years ago (2017) when they were packing out of Glass House, a building in the Presidential Villa.

Narrating the situation further, she said there was a part of the Villa called Glass House, where Mr Buhari asked Mamman Daura family to stay when he assumed office. She said:

“My name is Fatima. I am a daughter to Malam Mamman Daura… if one reasons well, he or she will understand that it is not possible to say that the wife of the president is denied access to her apartment but let me give a context,” she said.

“The apartment in question is called the Glass House. You know that there are several houses and apartments in the villa. When the president got into office, he gave the Glass House to our father, Mamman Daura.

“You all know that they are friends and are related, more so, they grew up together like twins. When he became president, he gave the Glasshouse to our dad and said he should stay there. Our dad stayed there for three years now until when the president’s son, Yusuf, had an accident and went to Germany for treatment.

“When he returned, the president told our dad to move out of that apartment to an even bigger one in the villa, that Yusuf is going to stay and be treated in the Glass House. The Glass House is closer to the main presidential apartment and that will make easier access to him by his mother. It is not in her apartment which is in the main apartment.”

Fatima narrated what led to the incident that was captured in the video, saying she recorded it to use as evidence against the first lady.

“(On that day) My mom and dad were not around. So, my dad instructed me and my elder sister, both of us are working and we go to work every morning, that we should come on a Saturday and move our belongings to the new apartment the president instructed,” she said.

“We planned to park out then and have even concluded moving all the things. All of a sudden, in the afternoon as we were busy on that errand of packing our belongings when we heard noise from outside. I was in an inner room in the house while my sister was in an outer one close to the main gate of the apartment. So my sister went out before I could come out.

“On getting there, it was the wife of the president. When she came, the door was locked and she picked a metal chair and broke the door. I have sent the picture to you. My sister that went out was almost hit by the chair. She threw the chair which broke through the door and almost hit my sister.

“I was so shocked and afraid of getting there because she was shouting and reigning abuses words and saying we should move out of that apartment. That she has never seen this kind of thing before. I then went back and picked my phone because if one is to say that she acted that way, no one would believe it without a proof. She has already been saying a lot of things depicting that she is being suppressed.

“So I recorded it to show our parents and the security, so that they will know the truth should anything happen. Because the way she was raging and shouting, I was thinking that she would pick something and hit us with it or something like that. That was why we recorded it. Had it been we wanted to release the video, we would have done it earlier. But you know if a video clip enters one or two hands, you can’t control where it will get to.

“There are even other clips that have not been released, I will send them to you to see how she was insulting the security and how she drove them away saying who are they protecting and calling them bloody idiots. Its all on the video clip. That was what happened.”

Mr Daura’s daughter, however, said they had no sinister motive against the First Lady. She said there was no reason why they would lock the door for the First Lady if they knew she was going to come.

“We didn’t even know she was coming. If she had said that earlier, the doors would have been left open for her,” Mrs Abdulmutallib said.

Responding to a question on her father’s being leader of a cabal that controls the president, and whether it was part of what led to the fight, she said the question should rather be directed to the First Lady.

“My father and Buhari are relatives and had been mutual friends right from time. He’s just being there for the president and being loyal.

“My father is 80 and hardly talks. The president only seeks advices from him as an elder and there’s nothing more to it.”

She said stated that the cabal rumor hurts their family.

“We definitely feel bad as his family anytime we hear such hearsays, but just like our father, we always put our trust in God. We are positive that the truth shall surface someday,” she stated.

“Our family never had issues. If there was any, then it ensued after Mr Buhari assumed duty.”

TheCable was unable to reach Suleiman Haruna, spokesman of the first lady, as he neither responded to calls nor replied a text message sent as of the time this report was filed.

House Of Horror: Police Rescues Another 300 Inmate From Torture Centre In Buhari’s Village