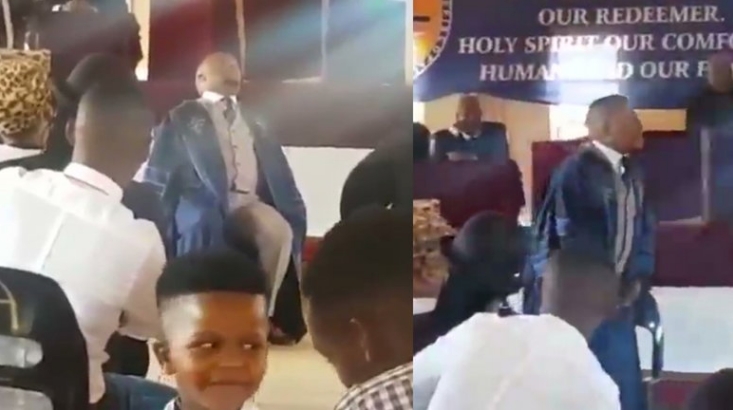 A video has emerged online showing the sad moment a pastor allegedly died while preaching the word of God with outrageous energy in his church.

In the video, the man of God could be seen moving from one end of the auditorium to the other, preaching the salvation message to an attentive congregation with soo much energy amidst cheers and a standing ovation.

At a point during the preaching, the Pastor is seen taking a seat and repeatedly mentioning the name of Jesus before falling on the ground.

Some alarmed church members are also seen gathering around him to ascertain what was the problem with him, while other congregants remained seated, apparently out ignorance about the situation.

An Instagram user @NsemWoKrom who posted the video of the incident, said the pastor died as a result of the fall and a postmortem has revealed that he had “high blood pressure and was diabetic”.

“Pastor dies when preaching. Postmortem show he has high blood pressure and was diabetic. He didn’t even know,” the user captioned the video.

Meanwhile, KanyiDaily had reported how a 46-year-old evangelist died while fasting for 40 days and nights to seek God’s favour as he plans to open his own church in Eziala Nguru in Ngor Okpala council area of Imo State.

“I Was Misquoted, I Didn’t Say Operation Amotekun Is Illegal” – AGF Abubakar Malami