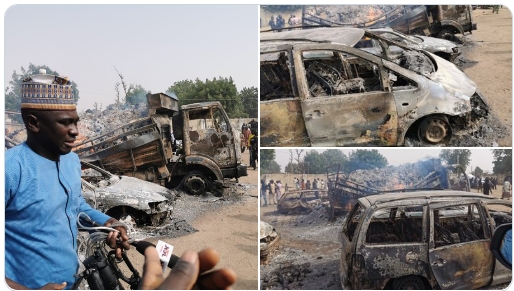 Suspected Boko Haram members have killed over 30 civilians while kidnapping some travellers along the Maiduguri-Damaturu Highway.

The insurgents reportedly destroyed and burnt 17 vehicles and goods worth millions of naira during the attack in the area.

Ba’na Auno, one of the residents who escaped the attack said the insurgents had stopped the passengers in Auno due to closure of entrance into Maiduguri town at 6 pm.

“They came at exactly 9.50 pm on Sunday and started shooting sporadically and we fled into bushes for safety,” Auno said.

“They came at exactly 9:50pm on Sunday and started shooting sporadically and we fled into bushes for safety. Unfortunately when we returned this morning to Auno town, we found out that nine passengers were killed but five of them could not be identified as a result of severe burnt.”

Another resident, Modu Babagana said that several women were abducted by the insurgents, with houses torched in the attack.

He also said commercial vehicles including eight trucks loaded with goods were burnt along with the consignments.

“They made away with a Hummer bus, a Golf car and J5 bus loaded with women. They also looted houses and shops before setting them ablaze,” Modu explained.

Meanwhile, the Borno state governor, Babagana Zulum visited the scene if the incident on Monday.

The governor was in the location to assess the level of damage caused by the terrorists and also to sympathise with the victims of the attack.

I was earlier this morning at Auno, few kilometers to Maiduguri to sympathise with the victims of yesterdays attack. We will continue to commit ourselves towards the total eradication of this insurgency, In Sha Allah.

Professor Babagana Umara Zulum mni, FNSE @GovBorno @ProfZulum didn't waste time in quickly visiting the locus in quo. This will not shake our faith in the @HQNigerianArmy and soon good will prevail over the evil pic.twitter.com/g2fNMbjWQb

My heart is broken this morning. #BokoHaram came 2 #Auno (less than 5km to the International Airport and @NigAirForce Base) & did this to travellers who were locked out 5 minutes to 5pm from conveying their goods into Maiduguri. More than 30 people were killed and many abducted pic.twitter.com/PCtmgm5Wd2

IS EITHER THE NORTH BREAKS SILENCE OR HYPOCRISY STRANGLED US ALL.

Yesterday commuters were denied access into the town of maiduguri because they arrived AUNO around 6:05pm and the road is normally closed by 6pm.

The "defeated terrorists ISWA/Boko haram again attacked Auno town, a stone throw away from the Borno state capital, meaning Auno is not an Island on Lake chad but on the Damaturu-Maiduguri express road. pic.twitter.com/NWcjCJmLRd

Boko stroke near Maiduguri killed and Kidnapped #Nigerians
Incase they lie to you in their security briefing to keep there jobs
Here are the pictures pic.twitter.com/FnfAqkPPfG

#BokoHaram killed nine civilians & abducted several passengers on Maiduguri-Damaturu highway. The attackers also burnt 17 vehicles & goods worth millions of naira in their wake. The incident happened at about 9:50pm on Sunday, in Auno town, Konduga LG of Borno State. pic.twitter.com/vdpLwKG6yL