UK Prime Minister, Boris Johnson was discharged from hospital Sunday after a coronavirus battle that took him to ‘death’s door’, according to Daily Mail Online.

KanyiDaily had reported that Boris Johnson was diagnosed over two weeks ago, becoming the first world leader confirmed to have the coronavirus.

His coronavirus symptoms at first were said to have been mild, including a cough and a fever, and he was working from home during the first few days.

However on April 5th, he was admitted to St. Thomas Hospital in central London, after his condition worsened and he was transferred the following day to its intensive care unit, where he received oxygen because of the persistent coronavirus symptoms.

The UK prime minister spent three nights there before moving back to a regular hospital ward.

UK government spokesman confirmed Sunday afternoon that Johnson had been released from St Thomas’s Hospital after being admitted last Sunday.

“The PM has been discharged from hospital to continue his recovery, at Chequers. On the advice of his medical team, the PM will not be immediately returning to work,” the spokesman said.

“He wishes to thank everybody at St Thomas’ for the brilliant care he has received. All of his thoughts are with those affected by this illness.”

As he prepared to leave the hospital, the PM said he owes his life to the National Health Service staff who treated him for COVID-19, ahead of figures Sunday in which the U.K. is expected to surpass 10,000 coronavirus-related deaths.

“I cant thank them enough,” Johnson said in his first public statement since he was moved out of intensive care Thursday night at St. Thomas Hospital in London. “I owe them my life.” 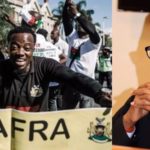