The founder of DAAR Communications, High Chief Raymond Dokpesi has raised questions about the treatment of coronavirus in Nigeria. 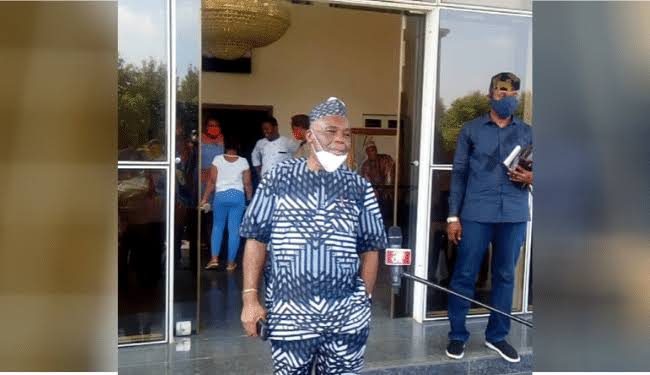 KanyiDaily recalls that Chief Dokpesi, his son, daughter-in-law and six other members of his family had tested positive for coronavirus.

The DAAR founder was discharged on Thursday alongside two of his grandchildren from the Gwagwalada isolation and treatment centre in the Federal Capital Territory (FCT), after they tested negative for the virus.

While addressing the press following his discharge, Dokpesi praised Nigerian doctors and other health workers who attended to him and his family, saying they are comparable to those in other parts of the world.

He, however as seen in a viral video, raised questions about the treatment of coronavirus in the country.

According to him, he was treated with malaria drugs all through his stay at the isolation and treatment centre, asking when did COVID-19 become synonymous with malaria.

“I still have doubts in my mind and I need to be educated. What’s the difference between COVID-19 and malaria? Every drug we were given were malaria medications.”

“A number of persons who tested positive were checked in reputable labs, hospitals in Abuja and were found to have malaria parasites in their bloodstreams. When did malaria become synonymous with COVID-19?” he said.

KanyiDaily recalls that the Minister of Health, Osagie Ehanire had revealed that the drug used in treating coronavirus patients in Nigeria is an anti-retroviral medication called ‘Remdesivir’.

Remdesivir was originally developed as a potential treatment for Ebola and has been adopted by the government as of the options for treatment of COVID-19 patients.