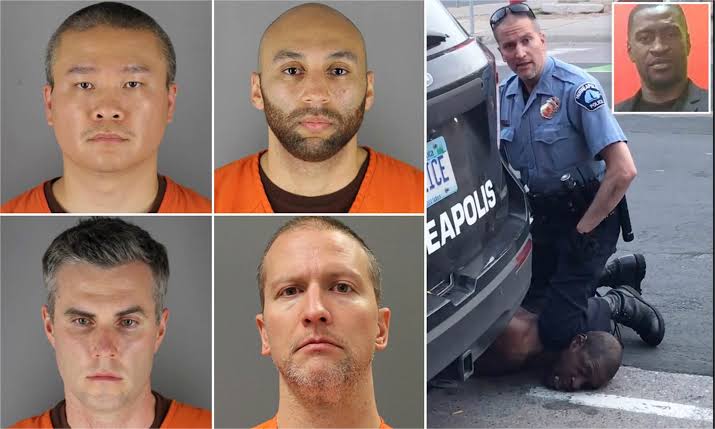 Chauvin, who was filmed kneeling on Floyd’s neck for nearly nine minutes, had previously been charged with third-degree murder and second-degree manslaughter.

His colleagues, Thomas Lane and J.Alexander Keung, who helped restrain Floyd, and the fourth officer, Tou Thao, who stood near them, were not initially charged.

The situation sparked series of worldwide protest with a call for an end to police violence against black citizens and for justice to be duly served to the four former Minneapolis officers.

In a tweet on Wednesday, US Senator, Amy Klobuchar announced that Thao, 34, Kueng, 26, and Lane, 37, are now charged with aiding and abetting second-degree murder and second-degree manslaughter.

Minnesota Attorney General Keith Ellison is increasing charges against Derek Chauvin to 2nd degree in George Floyd’s murder and also charging other 3 officers. This is another important step for justice.

All four of the former Minneapolis officers faces a maximum sentence of 40 years in prison, according to the criminal complaints.

A second-degree murder acarries a statutory maximum sentence of 40 years upon conviction, compared with 25 years for third-degree murder.

The first count of aiding and abetting in the murder case has a maximum possible sentence of 40 years in prison, while the manslaughter-related count has a 10-year maximum prison sentence.

FAMILY’S REACTION: This is a bittersweet moment. We are deeply gratified that @AGEllison took decisive action, arresting & charging ALL the officers involved in #GeorgeFloyd's death & upgrading the charge against Derek Chauvin to felony second-degree murder. #JusticeForGeorge pic.twitter.com/jTfXFHpsYl

KanyiDaily had published a video that shows how George Floyd died on Monday, May 25, 2020, after Derek Chauvin pinned him to the ground by pressing his knee into Floyd’s neck for over eight minutes as the black man repeatedly said, “I can’t breathe.”