A unarmed black man identitied as Jacob Blake shot in the back seven times by a white police officer in front of his children in Kenosha, Wisconsin, United States.

In a video circulating the social media, two cops with weapons drawn were seen trailing the black man on Sunday night as he walks to a gray van and opens the driver’s side door to get inside.

One of the police officers then grabs him by the back of his shirt and shoot him multiple times at close range. At least seven shots could be heard, though it was unclear if more than one officer fired.

Local reports indicate that Blake’s children were inside the SUV and watched as their father was gunned down. A fusillade can be heard, followed by a car horn, and bystanders screaming.

Several witnesses said the incident happened after cops were called to the scene due to a domestic dispute and Blake was only trying to break up a fight between two women outside a nearby home, according to Kenosha News.

Wow. This Black man was shot several times in the back by @KenoshaPolice today. He was getting into his car after apparently breaking up a fight between two women. He’s in critical condition now. We demand JUSTICE! #BlackLivesMatter pic.twitter.com/I1reDEp4nw

Rioting and protests erupted in the wake of the shooting as the County of Kenosha declared a state of emergency and a curfew has been put into effect by authorities until 7am on Monday.

The Kenosha Police Department said in a statement that cops were responding to a domestic incident at around 5:10 p.m. when they were “involved in an officer-involved shooting.”

The gunshot victim — identified as 29-year-old Jacob Blake — was air-lifted to Froedtert Hospital and was listed in serious condition, cops said.

“Jacob Blake was shot in the back multiple times, in broad daylight, in Kenosha, Wisconsin,” Evers tweeted. “Kathy and I join his family, friends, and neighbors in hoping earnestly that he will not succumb to his injuries.”

Evers also showed support for the Black Lives Matter movement and called for accountability as unrest began to rattle Kenosha.

“We stand with all those who have and continue to demand justice, equity, and accountability for Black lives in our country—lives like those of George Floyd, of Breonna Taylor, Tony Robinson, Dontre Hamilton, Ernest Lacy, and Sylville Smith,” he wrote.

“In the coming days, we will demand just that of elected officials in our state who have failed to recognize the racism in our state and our country for far too long.”

The Wisconsin Department of Justice’s Division of Criminal Investigation said it will launch a probe into the incident which has sparked outrage online.

This is Jake Blake. He was tasered and shot SEVEN times at close range by cops in Wisconsin after he broke up a fight between two women. He’s in a serious condition – No cops have been arrested or fired. Pray that he pulls through. #DefundThePolice #BlackLivesMatter #jacobblake pic.twitter.com/7eZWhu1HzG

If your response to seeing a Black man shot over and over in the back is to say “he should’ve followed instructions,” you are the problem. "Not complying" with an officer is NOT punishable by death under any circumstances, let alone an extra-judicial execution. #BlackLivesMatter

HE WAS UNARMED!
HIS KIDS WERE IN THE CAR!!
YET HE WAS SHOT IN THE BACK SEVEN TIMES!!!!
BY THE COPS!!

HE WAS UNARMED!!!
HIS KIDS WERE IN THE CAR!!! #BlackLivesMatter pic.twitter.com/UbTshVqBHY

Local church's "Black Lives Matter" sign next to a dealership with burning cars.

i'm sick of these disgusting creatures destroying shit after black criminals get what they deserve#BlackLivesMatter #BLM pic.twitter.com/kNZAsMloN8

Why are we not flooding the Twitter handle of @KenoshaPolice for Jacob Blake. When will the racism stop n #BlackLivesMatter #SayHisName #JusticeforJacob

Protests continue in front of the police department in #Kenosha #BlackLivesMatter pic.twitter.com/9PELRHuBuK

This is insane. BLM rioters armed with semi-auto rifles have shut down the street in #Kenosha and ordered a Sheriff’s vehicle to stop. Video by @livesmattershow. #BlackLivesMatter pic.twitter.com/cDhmOBG1p9

It just keeps happening. I will not share the video. No one should have to watch that. But here is a beautiful photo of 29-year-old Jacob Blake, who was shot seven times in the back by police in broad daylight in Kenosha, Wisconsin.

Outbreak of anti-police violence in Kenosha, Wisc. after a police-involved shooting of a black male. #BlackLivesMatter pic.twitter.com/Vf5efM5qIR

Protests in #Kenosha WI at this moment aren't "turning violent." It's intentionally manipulative to use this language. They began with violence. They are a human response to violence. #DefendBlackLife #DefundPolice #BlackLivesMatter https://t.co/ifreVQGjEK

This is coming three months after another black man, George Floyd was shot dead by a white police officer who pinned him to the ground by pressing his knee into Floyd’s neck for over eight minutes as the black man repeatedly said, “I can’t breathe.”

Floyd’s death also set off worldwide protests with a call for an end to police violence against black citizens and for justice to be duly served to the four former Minneapolis officers involved in killing the 46-year-old man. 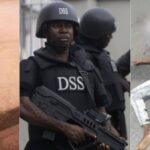