Ahead of this Saturday’s governorship election in Edo State, the candidate of the All Progressives Congress (APC), Pastor Osagie Ize-Iyamu and Governor Godwin Obaseki of the Peoples Democratic Party (PDP), last night squared up in a debate to unfold their programmes to the people of Edo State. 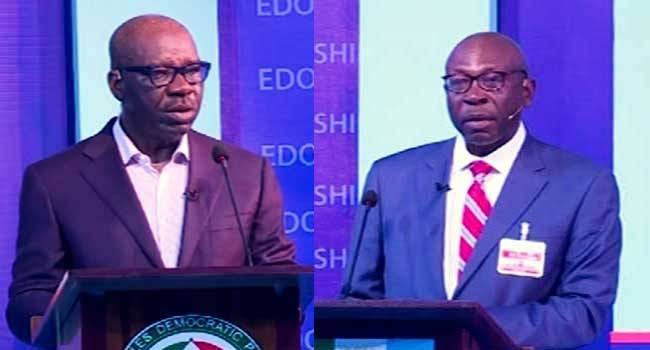 The both candidates spoke on the areas of security, health, agriculture, education, and employment, among others during organized by Channels Television on Sunday night.

During the debate, the moderator, Seun Okinbaloye, asked the questions and both candidates disagreed on virtually every issue – job creation, debt profile, governance, qualification, and the facts that they built their plans on.

Beyond a handshake at the start of the debate, they would only agree on the need for community policing and the importance of a refinery project; the latter still sparked some disagreement.

Ize-Iyamu said, based on his experience and agenda, he would be a square peg in a square hole. “I have a clear cut agenda and we know what to do,” he said.

In his opening statement, Obaseki said his administration had made remarkable and fundamental changes in how Edo state is governed. “Our achievements are so numerous,” he said.

Ize-Iyamu quickly went on the offensive, accusing Obaseki of creating bogus jobs in the state. “In the past one month, he has appointed over 2,000 people as SSA and social media and the rest of them; those are not jobs.”

In his defence, Obaseki said jobs created by his administration – about 157,000 – were verifiable via third-party sources such as the National Bureau of Statistics.

He also noted that the government’s role was not to directly create jobs but to leverage and create an enabling environment for the private sector.

Ize-Iyamu said his government will abolish multiple taxations in Edo state. “I heard them say they have abolished Agberos, but I can name so many who are still in the employment of the Edo state government,” he said.

He also advocated for the widening of the tax net. “I do not believe, because we are looking for money, we should maintain a very high tax level.”

He said the Obaseki administration hasn’t done anything new to improve tax administration. “All they have tried to do is to increase taxation, or because of election, relax on it.”

On tax, Obaseki said his administration only collects tax from people who have earnings. He also claimed to have widened the tax net by bringing more people into the formal sector.

He insisted that his administration had deployed technology to eliminate the use of cash collection and reduce corruption in the process. “I will not allow lions and tigers to collect taxes in Edo state,” he said.

Edo state is an oil-producing state and Obaseki said his administration has worked to set up a modular refinery in the state.

“The refinery is 90 percent read and in the next few months, it will be ready and commissioned and people will see oil being produced in Edo state,” Obaseki said.

However, Ize-Iyamu said the modular refinery was an APC idea and lampooned Obaseki for not investing enough in its success.

“I know that the initial capital is $10million,” he said. “It will interest Edo people to know that our investment is just N700 million, which is less than one percent of the share in that company. That, to me, does not show seriousness.”

The federal government, he said, had to restructure the state’s debts. “What people don’t even know is that there were unpaid debts to contractors, to the extent of another N60 to N70 billion,” he said.

In his response, however, Ize-Iyamu faulted Obaseki’s criticism of the Oshiomhole administration. “Sometimes you seem to forget the role you played in the past government,” he said.

Obaseki served the Oshiomhole administration as an economic adviser.

Ize-Iyamu further went on to accuse the Obaseki administration of financial misappropriation. He said about N75 billion has been collected and “shared to cronies.”

Obaseki said the Edo State civil service was not bloated, but aged. “We need to bring more people, smarter people into government,” he said.

He accused Ize-Iyamu, during his time as Secretary to the Edo State Government, of sacking the Crème de la crème of the civil service.

“Currently, we are restructuring the civil service,” he said.

Ize-Iyamu refuted Obaseki’s claim that he sacked the best of the civil service by mocking his fellow contestant for not being able to re-train civil servants.

“I left office 13 years ago,” he said. “For eight years, you served under a government and you are telling us that you did no training. That lamentation is scandalous.”

He added that Obaseki’s model for the civil service was not working.

“The model the Governor has tried to adopt is to reduce the workforce to the barest minimum, but unfortunately, whatever savings he thinks he is making is not being seen in capital projects,” he said.

Ize-Iyamu accused Obaseki of under-investment in security. He claimed Obaseki has not invested in tracking technology and drones.

“When you invest in security, the issue of cultism, thuggery, violence, you can tackle them,” he said.

In his response, Obaseki said his administration has rethought security and created a new security architecture for the state.

He also informed the audience that his administration actually has invested in trackers.

“These are security matters,” he said, “so I am not going to sit here and tell you how much we have invested in security.”

One of the issues both candidates agreed on was community policing. Ize-Iyamu said the concept is not bad, but grey areas must be sorted with the federal government.

“I believe that state police is required,” Obaseki said.

Ize-Iyamu said it was regrettable that Edo state is being stigmatised on the issue of human trafficking. “We don’t want our state to be stigmatised,” he said.

He said it was imperative to make the state economically viable to discourage people from leaving.

Obaseki said he was proud of what his administration has done to reduce human trafficking in the state and criticised past governments for downplaying the issue.

“We were in denial,” he said. “Government was pretending it didn’t exist because people were benefiting from the trade.”

Ize-Iyamu advocated for a shift to e-learning. “We need to resort to technology,” he said. “We also need to train our teachers.”

He said the Obaseki administration was trying to train a teacher for N1.5 million.

“And the Governor said they have trained 11,000 teachers; that means they have spent over N16 billion on just training teachers. But this training, how has it impacted our children?”

Responding to Ize-Iyamu, Obaseki said he wished he had the kind of money (N16 billion) being bandied. “We would do wonders,” he said.

He said his administration has transformed basic education in Edo state, through EdoBest, “to the applaud of the whole world.”

Obaseki said Edobest was about using technology to facilitate education; the system, he said, has come in handy through the pandemic.

Ize-Iyamu faulted Obaseki’s record on healthcare in terms of personnel compensation and recruitment, and infrasttructure.

“There are some things you can’t cut corners with,” he said. “Today if you do an audit of the entire doctors in Edo State Health Management Board, they are less than 200. We need to employ health personnel.”

Responding, Obaseki said his administration is rethinking healthcare. “We should not think of healthcare as hospitals, but as a system,” he said.

He also said his administration has introduced the Edo State Health Insurance scheme. “Once people can put something aside for their health care, then it becomes easy to pay for care and get investments into the health care system.”

“The sort of yield we are getting from maize, rice, has been impressive,” he said.

In a riposte, Ize-Iyamu said the Obaseki administration has failed to position the state for agriculture excellence.

He said his administration will invest in small-scale and commercial farming. “We believe that farming is the right way to go,” he said.

Obaseki and Ize-Iyamu contested in the 2016 Governorship election in the state.

In 2020, both have switched political allegiances, with Obaseki moving from the APC to the PDP after Ize-Iyamu switched sides.

Describing why he left the APC to join the PDP, Obaseki said it was a decision he made with the support of his base after he was disqualified from the APC primaries.

He thanked the PDP leadership for admitting him into the party and giving him a platform to contest for a second term.

On his part, Ize-Iyamu said he was one of the founding fathers of the APC and only left because of certain issues. “I am going to a place that I built,” he said. “It’s a homecoming.”

Obaseki was disqualified from the APC primaries based on controversies around the authenticity of his University certificate obtained from the University of Ibadan.

On Sunday, he defended his school credentials by re-stating that he attended the university.

Allegations of cultism and violence during his time at the University of Benin have previously been leveled against Ize-Iyamu.

On Sunday, he waved off the allegations. “I graduated from the University of Benin. I was very active in the Students Union. And my records are clear. People have alleged that ‘oh, when you were in school, you did that’.

“But I think they should go to school authorities and find out exactly what was the offence. I am proud to say that throughout my stay, I had no criminal matter.”

Ize-Iyamu went on to allege that Obaseki failed his O-Levels and has not been able to present an A-Levels certificate.

Oshiomhole, undoubtedly a major factor in the election, came up at the tail-end of the debate.

Asked to describe their relationship with the former Governor, Obaseki said he was one of those who helped Oshiomhole win his election as Governor.

“I supported him,” Obaseki said. “I put together the plan for his administration and for eight years I worked pro-bono to make sure he succeeded.” However, he said Oshiomhole had his own agenda when he (Obaseki) became Governor.

“He had his own personal agenda and thought that I would be so subservient, and he didn’t realise I would have been as independent as I have become,” he added.

But Ize-Iyamu said he was shocked at Obaseki’s claim. “When I heard the claim that he raised money (for Oshiomhole), I laughed,” he said.

The debate ended with both candidates getting the opportunity to ask each other a question.

Ize-Iyamu questioned Obaseki over one of his agriculture projects in Sobe, Edo state, for which he had apparently borrowed N2 billion. “That money, has it been plowed back to that project? Is that money back to the state coffers? Or has the project failed?” Ize Iyamu queried.

Obaseki denied that N2 billion was spent on the project and said it was still ongoing.

For his own question, Obaseki asked Ize-Iyamu how he hoped to fund his SIMPLE agenda, in light of the challenges posed by the coronavirus pandemic.

“The waste you waste money is not the way I waste money,” Ize-Iyamu replied. “I’m very prudent in financial management.” 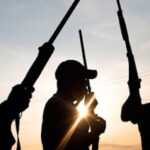 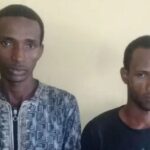