The United States President, Donald Trump on Tuesday reacted to a campaing rally held by his supporters in Nigeria, describing it as a great honour.

Trump made this known when he shared a video of the parade on his Twitter page with a caption, “A parade for me in Nigeria, a great honor!”

In the viral video, hundreds of men and women were seen wearing Trump T-shirts, carrying placards with the inscription: “Trump 2020,” while chanting solidality songs in support of the Republican candidate in Tuesday’s US election.

It was learnt that the rally was held on October 25, 2020, in the eastern Nigerian city of Onitsha, Anambra State, led by the Rev. Daddy Hezekiah, founder of the Living Christ Mission Inc.

“President Trump, may we shout for joy over your victory,” Rev. Daddy Hezekiah said in the video, ahead of Tuesday’s election which will decide the next U President between Trump and his Democratic challenger, Joe Biden.

President Trump tweeted the video on Tuesday as he urged black voters to back him instead of Democrat Joe Biden.

“Nobody’s done what I’ve done in terms of the African American community. And they see it. And they’re tired of being used by the Democrats for 100 years,” Trump told reporters Tuesday afternoon at his campaign headquarters in northern Virginia.

A parade for me in Nigeria, a great honor! pic.twitter.com/EHiSQMFvSZ

This is coming despite President Trump calling African nations “shithole countries“, saying Africans would never leave the United States if allowed in. This year, he added Nigeria and five other countries when he expanded visa ban. 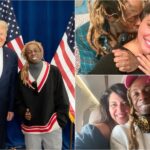