Over 500 bandits have promised to surrender their arms and embrace peace after meeting a prominent Islamic cleric, Sheikh Ahmad Gumi,

According to Desert Herald, the bandits are said to be those terrorising Zaria-Giwa roads as well as Birnin Gwari area in Kaduna state.

Gumi reportedly held a preaching session in Sabon Garin Yadi, and over 500 bandits gathered to listen to what the cleric had to say in the area which has large Fulani settlements.

The suspected bandits whose wives were seen in tears following the cleric’s message of peace promised to cease hostilities and ensure security in Kaduna.

But they warned that they would return to their old ways should security agents continue to harass their families and destroy their belongings.

They also vowed to go back to the forests should the government fail to fulfill their own part of the peace deal which was attended by the Kaduna State Police Commissioner, Umar Muri, and all the top officers of the command.

“Virtually all the top armed commanders were freely given the chance to address the session with almost all of them lamenting the condition they were subjected to and expressed the frustrations that led them into kidnapping and banditry.

“Most of them were unanimous in their submissions. They told Sheikh Gumi and CP Umar Muri that they were forced into taking up arms. They said over the years they were subjected to constant humiliation, harassment, arbitrary arrests, extortion and even killings of innocent ones by law enforcement agents.

“They lamented that security personnel have killed many of their family members with many of them losing virtually all their possessions through cattle rustling, extortion by security agents and through military bombardments. As a result they lamented that thousands of their youths do not have anything to do and there is no means of livelihood hence their decision to go into arms struggle.

“They also complained of lack of government’s presence and the absence of basic necessities like water, schools, clinics etc in all their localities and vowed that as long as government and the society did not change their attitudes towards them, there will never be peace.

“They accused the government of not being sincere in ending instances of banditry and kidnappings,”

“They accused Nigerian security agents of benefitting hugely from the current insecurity. The Ardos (Fulani leaders) were also in attendance.

“They told the large gathering that most of them, including the armed Fulani, only accepted the invitation to come from far and near because of the respect and confidence they had in Sheikh Gumi.

“They told CP Umar Muri that the police and soldiers are part of their problems and that their actions in the past did so much harm in escalating the insecurity associated with kidnappings and armed banditry.

“In his response, CP Muri who spoke in their native Fulfulde, pleaded for understanding and patience and assured them that he would deliver their message to the Inspector General of Police, Mohammed Adamu.

“He said the police would continue to support any peace initiative and that the leadership of the police under IGP Adamu recognises the rights of all Nigerians. He told them that he was ordered by the IGP directly to come because of the importance the government attached to Sheikh Gumi’s peace efforts,” the report said.

While noting their concerns, Gumi reportedly told them to be patient and stop committing crime as he will make a case for them when he meets with President Muhammadu Buhari.

About 25 top commanders of the militia, who were present at the meeting, reportedly promised to cease hostilities and pledged to work with the cleric.

KanyiDaily recalls that the head of Zamfara bandits who denounced violence, had opened about why they went into kidnapping and killings of 50 people for evrry slain herdsman. 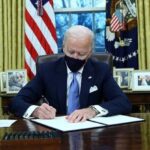