An operative of Amotekun, Job Adewale, has reportedly been shot by the Divisional Police Officer in charge of Ile-Igbon Division, Surulere Local Government Area of Ogbomoso in Oyo State, Adepoju Ayodeji. 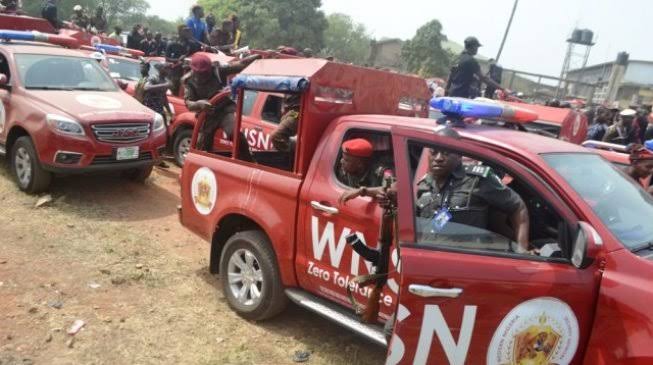 According to SaharaReporters, Adewale was shot on Friday at close range on by the police DPO for arresting Fulani herdsmen who allegedly destroyed a cassava farm.

The Amotekun commandant in the state, Col. Olayanju Olayinka (retd.), confirmed the incident while speaking ea to reporters in Ibadan on Friday,.

Olayinka said that Amotekun operatives received a distress call from farmers to come and arrest some Fulani herdsmen who had destroyed their farms.

After the Fulani herdsmen were arrested, the DPO ordered the arrest of the operatives of Amotekun who made the arrest.

It was gathered that when the leaders of the Amotekun group, led by Olatunji Mayowa and Jenyo Isiaka, got to the station to secure the release of the arrested Amotekun personnel, the DPO said they had no business in arresting anybody.

A source said that while one of the Amotekun operatives was speaking with the police officer on duty at the station, the DPO came out of his office, shot at them, and chased them away.

“As one of the leaders of the Amotekun was discussing with the police station guard, the DPO rushed out from his office, snatched an AK 47 rifle from one of his officers, and sprayed the Amotekun operatives with bullets.

“One of the men of Amotekun, Job Adewale, was hit at close range in the right leg and the bullet also broke his right ribs. The DPO reloaded the rifle and released more gunshots at other personnel while they were trying to carry the wounded Adewale,” the source said.

KanyiDaily had recently reported how Amotekun intercepted a truck loaded with gunmen suspected to be Fulani herdsmen heading to Oyo state with 25 guns and 10 dogs.