Chad’s President, Idriss Deby has died after suffering injuries on the frontline during a battle against rebels who were advancing on the country’s capital, Ndjamena.

The country’s military announced on Tuesday that Deby, 68, died barely 24 hours after he was declared winner of a presidential election held on April 11.

“The Chadian president has just breathed his last defending the sovereign nation on the battlefield” spokesman General Azem Bermandoa Agouna said in a televised statement.

Mr Deby, who was reported Monday to have won a sixth term, had earlier led the military to beat back the Chadian rebels, killing some 300 of them, while they marching marching towards N’Djamena.

The constitution of the country expects the speaker of the parliament to take over, but Al Jazeera reports that the armed forces has announced that a military council will supervise the transition.

Mr Deby assumed power in 1990 on the back of a rebelion 1990. He had since won six elections including the recent presidential election held on April 11.

KanyiDaily recalls that last year, President Déby led the military to claim victory against Boko Haram, saying their bases have been completely destroyed.

READ:  "I Helped E-money Kidnap Rich People But He Left Me Poor As A Begger" – Suspect Confesses 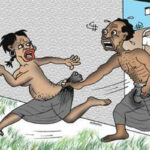 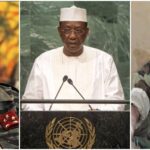