Pankeeroy, with over 500,000 followers on Instagram, was arrested with 34 other suspected fraudsters by operatives of the Lagos Zonal Office of the commission.

EFCC said the suspects were arrested on Wednesday, April 21, 2021 at their hideout in James Court, Lekki, Lagos following verified intelligence received by the Commission over alleged criminal activities.

Until his arrest, Chidera, who claimed to have gone into Bitcoin scam after he suffered depression, had been presenting himself as a vendor who redeems bitcoin vouchers using the bitcoincoretrading.com platform to defraud his unsuspecting victims.

A Mercedes Benz AMG GLE model worth N36, 000,000 was recovered from him upon his arrest, and investigations by the EFCC revealed that the suspect has N22,300,000 worth of Bitcoin in his blockchain account.

The suspects will soon be charged to court, according to the EFCC. 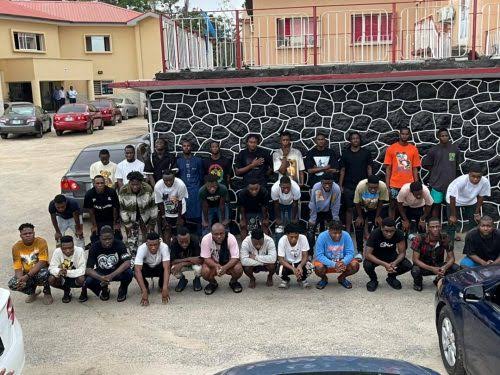 KanyiDaily had also reported how another Instagram Celebrity, Linus Williams Ifejika, popularly known as Bitcoin Lord, was arrested by the EFCC in Enugu.

“I Make More Money As Solo Artiste, Call It Greed It’s Your Own Cup Of Tea” – Peter Okoye

Nollywood Actor, Baba Ijesha Arrested For Defiling 14-Year-Old Girl Since When She Was 7