A beautiful American lady identified as Mary Skittlez has taken to social media to flaunt the exotic birthday gifts she got from her loving husband. 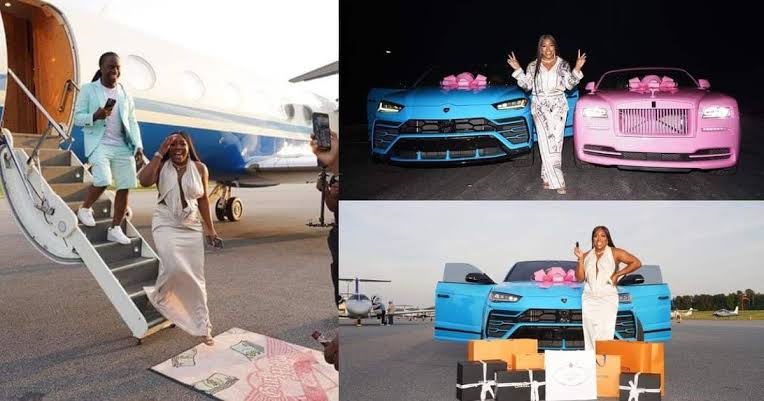 In a post shared on her Instagram page, the lady revealed that her husband identified as @MrZothegoat, surprised her with private jet trip to mark a memorable birthday for her.

The man also gifter her two new exotic cars – a Lamborghini and Rolls Royce – and loads of luxury clothing, shoes, handbags and accessories from top designers.

Sharing photos and videos of the luxurious gifts with her followers, Mary gushed over her husband saying he’s everything she ever prayed for.

The first surprise in the video entailed part of her family who was already on the jet, and when she got in, everyone shouted “surprise”, and she realised her family was also involved.

When they arrived at their destination, Mary walked out to spot a brand new blue Lamborghini SUV parked on the runway and was her brand new car.

An ecstatic Mary jumped into her ride and hysterically shouted while on the driver’s seat, not realising that it was just the beginning.

She was later led to a building where a party was just getting started. After removing her blindfold, she opened her eyes to realise all her family members, including her dad, who does not like travelling, was there to celebrate her.

As the night fell and they all thought they were headed to bed, her husband asked them to join a marching band set up for her.

After walking for some distance, Mary was surprised by another stunning pink Rolls-Royce, another posh ride that hubby Zo brought for her.

Mary was overwhelmed by the gift and noted in the video that she felt what it meant to be loved and lauded her husband for completing her life.

Swipe to view all photos below:

KanyiDaily had also reported how a handsome young man has gone viral on the social media after he proposed marriage to his beautiful girlfriend with five different diamond rings.