Elizabeth Nalem, a mother of six from Makutano town in West Pokot County in Kenya reportedly divorced her husband of 20-year marriage to marry the holy spirit. 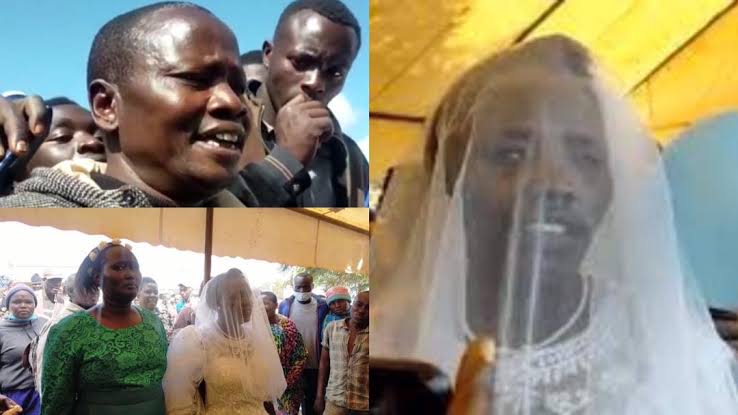 It was gathered that her husband, Joshua Nalem was left in a dilemma, not knowing what step to take next, after his wife left their matrimonial home to dedicate her life to the church.

According to him, “She went to church one day and when she returned she started waking up at 3am to go and pray. I asked her why she was braving the chilly weather just to pray, but instead, she decided to move out to a neighbouring homestead.”

Joshua claimed he tried to plead with her not to go but she refused. She told him she will come back once her “spirt husband” has granted her permission.

However, Elizabeth exchanged wedding vows with the Holy Spirit on Tuesday, May 25th, in a ‘lavish’ ceremony that attracted a multitude of people at the Chelang’a Gardens.

Her neighbour, Pastor Albert Rumaita granted her wish by officiating the peculiar wedding. He is also said to be the one who bought her the wedding gown and even ensured there was a convoy of cars to escort her on her big day.

Rumaita revealed he decided to preside over, plan and fund the wedding because the world might just be coming to an end.

After the wedding, an elated Elizabeth said she was done with serving the world and has now changed her life to serving God. She also disclosed that she has closed down her business.

READ:  Woman And Her Husband Dies At Borno IDP Camp After Giving Birth To Triplets [Photos]

“Today, I am one of those who have received the word of God. I have faced difficulties, and it made me look for God,” she said.

“God has shown me signs to travel to the United States when am done with Uganda. He told me to travel the world but I told him I won’t be able and requested him to recruit other members to help me in spreading the gospel.”

Meanwhile, the new bride who is from Makutano town in West Pokot County says she is headed for her honeymoon in Uganda.

ALSO READ: An African woman who got married to seven husbands has revealed how she manages to satisfy all of them and live peaceful in harmony.