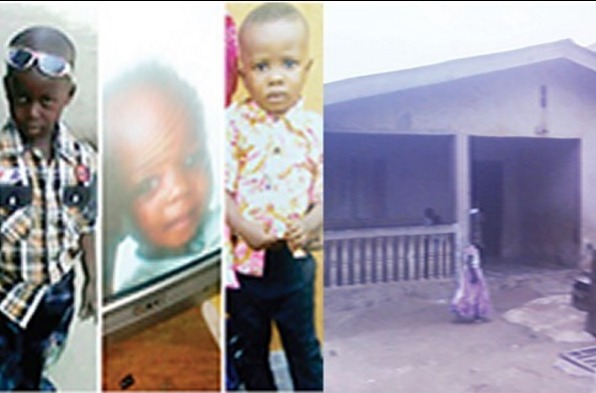 It was gathered that the women, who moved into a one-room apartment in the compound on Thursday, February 17, disappeared with the children on Friday evening.

The women, said to be in their 30s, claimed that they were students of a school in Ikeja, Lagos, and would stay at the apartment for three weeks, pending the conclusion of their examination.

According to TheCable, the women who didn’t give the name of their school were said to have acted very friendly with the residents of the compound within the short time they spent there.

The women disappeared with the three children on Friday evening, after they reportedly asked to take a walk with the kids to get to a shop in the neighbourhood.

The case was reported to the Ajuwon police station after a search was launched for the new tenants and the children, but they were nowhere to be found.

Grace, wife of one Kingsley Peter, said her husband was arrested and that the officers at Ajuwon police station have refused to release him, despite arresting the barber who introduced the suspects to her husband.

When contacted, Ogun police spokesperson, Abimbola Oyeyemi confirmed the incident but said he has not received information on any arrest.

He said, “We heard about it. The case is under investigation. The kidnappers came to rent an apartment in that building. They recently packed into that place and other occupants of the house never knew that they had a game plan.

“Since they came into the house, they started playing with all these children, showing signs of a good neighbour. The parents relaxed thinking that are good people, not until they ran away with about three kids from that place.”

Oyeyemi said some persons were “invited” for questioning on the matter.

KanyiDaily had also reported that tragedy struck in Calabar as a landlord set one of his tenants ablaze in her room for owing him N11, 000 rent.