A bus passenger has been burnt alive by suspected members of the Indigenous Peoples of Biafra (IPOB) who were enforcing their sit-at-home order in Nkwogu, Ahiazu Mbaise Local Government Area of Imo State.

According to Daily Trust, two Hummer buses belonging to a popular transport company, Libra, were coming from Umuahia, Abia State capital, when they ran into a group of hoodlums suspected to be members of IPOB on Monday.

It was gathered that the IPOB members forced the bus to stop by shooting at the tyres. The passengers of the buses scuttled to safety, while one of the drivers was reportedly shot on the hip.

The passenger, who was inside one of the two buses that were torched by the hoodlums, could not escape before the vehicle was burnt down.

It was also gathered that there was heavy shooting around Banana junction along Orlu-Owerri road as gunmen engaged security agents in a shoot-out.

KanyiDaily had also reported how the sit-at-home order got bloody in Nnewi with two people losing their lives in a confrontation between the Army and suspected members of IPOB. 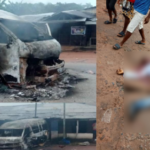 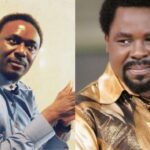