Many people are feared dead and property destroyed as members of Eastern Security Network (ESN) set up by the Indigenous Peoples of Biafra (IPOB) clashed with a combined team of police and soldiers in Orlu, Imo state.

It was gathered that the soldiers who were in military operation in the area stormed the community on Monday to dismantle the formations of the ESN, but was resisted by the superior forces of the IPOB vigilante allegedly killing one of the soldiers in the process.

The Nations quoted a resident in the area saying that there was shoot out between soliders and IPOB men and about five people were injured while one person was killed.

Also, about five buildings including a church, Blessed Holy Trinity Sabbath Mission, in Orlu Local Government Area were said to have been allegedly set ablaze by “the armed security operatives” who invaded the area.

“The burning of the church was carried out by those ecurity agents and the church that was burnt was the Holy Trinity Sabbath Mission in Orlu local government area.

Another eye witness claimed that 10 residents were allegedly killed by the Nigerian soldiers, who were in a retaliation mission, while over 13 houses and shops were razed.

“This was what happened, the soldiers came back to search for the vigilante people that killed their colleague, but in the process started shooting everybody they see, I can’t actually say how many have died, they are many but I think I counted over ten,” The Sun quoted him saying.

When contacted, the IPOB Media and Publicity Secretary, Emma Powerful, said that the military operation was an attack against the Igbos because the soldiers are killing innocent civilians.

READ:  Okorocha Runs To Court Over Plans To Arrest Him After May 29, Fingers APC Leaders

“The soldiers are killing civilians since this week in the area. How did we attack them first, did we go to their base and attack them first or they came to attack us in bush where we normally stay and work. We are not on the streets or roads we pusue terrorists in the bush and forest,” he stated.

“We shall not condone this any longer, we would not allow them to kill us again, we wouldn’t allow what happened in Obigbo to happen again in Biafra land. They can’t kill us because we have not done anything to them other than to protect our land and forest, they are just killing innocent civilians.”

He told newsmen on the phone: ”Why do you want to confirm from me. Did you confirm from them why they killed a policeman.”

READ:  Precious Chikwendu Hails Fani-Kayode As They Reunite For Their Son’s Birthday Party

However, the state policespokesman, Orlando Ikeokwu said that he was not aware of any causalities but “what I know is that there is military operation going on in the area.”

Videos circulating on the social media showed soldiers firing gunshots in major streets as military operation continued in the affected town as of Monday evening.

At least four Hilux vans conveying heavily armed soldiers were seen patrolling the roads, while two vehicles filled with ESN personnel were sighted in another part of the town.

Four persons, including a middle-aged woman, were said to have been killed by stray bullets while some properties were burnt during the violent clash.

See some reactions, photos and video from the scene below:

Can the @HQNigerianArmy @DefenceInfoNG please communicate what’s going on here in Orlu Town to the public?

It certainly has the appearance of a war scene.

Is an entire town under combat operation from our Military?

Can the C-in-C let Nigerians know who ordered this operation? https://t.co/6tT8ML9pn1

Orlu is on fire.

Where is isi opioro mango man that sneaked into Douglas House through septic tank?

What is he doing? What are men of the Nigerian Military doing in a peaceful town like Orlu? pic.twitter.com/RlIvrj98Ql

Please share this so that everyone can see it ! It’s happening right now in ORLU IMO STATE.. this was sent to me by a friend . Heard they radio stations close by are not allow the witnesses talk about it . Their is WAR. Orlu isn’t safe guys . pic.twitter.com/vkS1pHIbJE

This is orlu, Imo State, she was killed by a stray bullet, another innocent life cut short. all side should cease hostilities for the sake of peace. @Hope_Uzodimma1 do something to address the situation before it spiral out of control …. pic.twitter.com/uj4tKPdaU0

Thanks for the prompt intervention of #ESN. We love you all. #Orlu pic.twitter.com/TywREg73tU

Hello world the Nigeria army is commiting genocide against the Igbo's in ORLU IMO State pic.twitter.com/mi04i9VpXX

We have seen what @HQNigerianArmy did today in Orlu, Imo State. This is what @PoliceNG did to Shiite protesters today in Abuja. #EndSARS was a protest against extrajudicial killings and lack of respect for citizenship. It's time to return to the streets. #RevolutionNow pic.twitter.com/n35m7MKBaS

Orlu is on fire right now!!

Military men dressed in their uniforms are reportedly going from street to street killing people in their homes & shops, setting places ablaze. RT for awareness!!pic.twitter.com/4Vl9cbQpLT

Live In Orlu:"Terrorists In Nigerian Army Uniform Are Killing Orlu Residents In Broad Daylight. If Uzodinma Fails To Withdraw These Fulani Terrorists In Army Back To #Obinze Army Barracks In The Next Hour, The New Revolution Will Start At Douglas House Owerri Tonight".-MNK Wrote pic.twitter.com/ihbhCg2Pfp

@USinNigeria @UKinNigeria @EUinNigeria @IsraelinNigeria @StateDept @UN This is @HQNigerianArmy that you have been funding for years that couldn't defeat Fulani Herdsmen, #BokoHaram ISWAP, Fulani Bandits etc. but has power to kill civilians in ORLU today. pic.twitter.com/VVPW0Ch3Bb

READ:  US Police Names Chris Attoh As Suspect In Murder Of His Wife, Bettie Jenifer 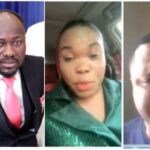