A video circulating on social media shows an unhappy bride standing like a tree as her groom sprays her money during their traditional wedding ceremony. In the viral video, the bride donned in blue and red attire could be seen standing still, keeping a serious straight face before the guests who came to witness her big day.

The groom who was excited at the wedding ceremony is seen spraying his bride lots of cash as they officially tie the knot, but she did not move or smile.

The happy groom even tried to whisper something funny into the ears of his woman but she did not budge. The man, however, did not stop as he kept smiling and spraying his woman.

KanyiDaily had also shared a video showing the moment a bride refused to kiss her groom in the presence of friends and family on their traditional wedding day. 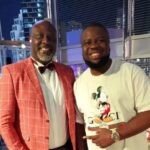 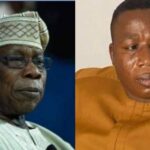