Relationship expert, Blessing Okoro has taken to social media to show off the new mansion she is building two years after she was ridiculed for claiming the house of a China-based billionaire, Onye Eze. 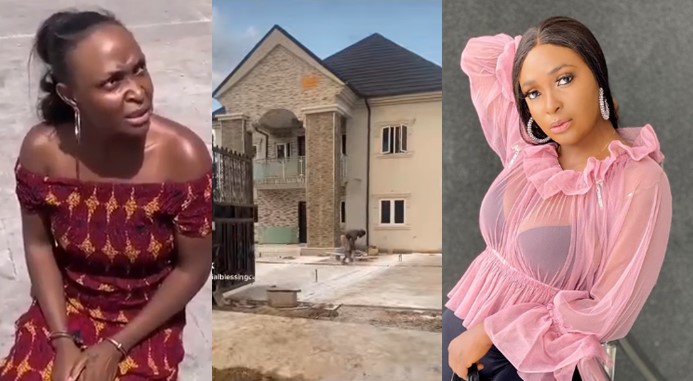 KanyiDaily had reported how Blessing Okoro brought ridicule upon herself in 2019 after she was caught in a lie in which she claimed ownership of a house belonging to Onye Eze on social media.

The relationship expert had taken to her Instagram page where she shared photos of Onye Eze’s seven-bedroom mansion and claimed she built it 8 years after her husband threw her out of his one-room apartment.

Unfortunately, the real owner’s attention was drawn to what some termed as a “fraudulent move” and he made sure to teach Blessing Okoro a lesson.

Many Nigerians have branded Blessing a “house claimer” and a “liar” on social media and for that reason have dragged her to the ends of the earth.

READ:  Davido Asks for Prayers As He is About to Have The Biggest Change in His Career

Two years after the incident, the relationship expert has taken to social media once again to show off another mansion she is currently building which is to be completed by the end of this year.

Sharing the video of the new house on her Instagram page, she wrote: “December I will show u the final result….. this is the process, we dey call White House and I am taking the street . Look out for BCEO Avenue 🙏🙏🙏.

“Audio to video. I refused to be rich only on Instagram. Paul say I picked up the stone nobody threw me and built mansion in the air, that line pain me😡😡😡.

“For every time they mocked me on Instablog I was building😂. The insult kept me pushing and determined I swear. They dragged me to my success story. I can’t thank you people enough. Thanks for not giving up on me🙏🙏 t,”

KanyiDaily recalls that Blessing Okoro had hooked up with Onye Eze for a video where they both claimed everything that happened between them during the “house scandal” was not real.