A Nigerian Lawmaker, Ben Igbakpa says he was detained and treated like a suspect in Ghana over a comment by President Muhammadu Buhari. 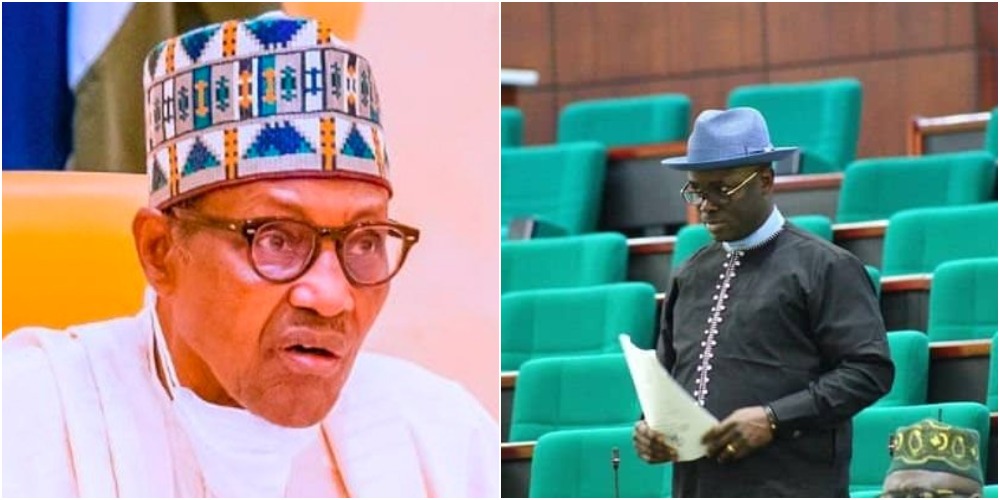 A member of the House of Representatives, Ben Igbakpa has revealed has that the Ghanaian Government has placed Nigerian lawmakers on the watch-list over a comment made by President Muhammadu Buhari on Terrorism.

Igbakpa, a lawmaker representing Ethiope East/Ethiope West federal constituency of Delta State, made the revelation on the floor of the green chamber on Tuesday.

KanyiDaily recalls that Buhari had claimed that high-profile individuals, including a member of the National Assembly, are those financing secessionist leaders like Nnamdi Kanu and Sunday Igboho, whom the president described as terrorists.

Speaking during plenary on Tuesday, Igbakpa revealed that he was detained at an airport in Ghana for four hours because of the pronouncement of President Buhari.

Igbakpa challenged Buhari to name the lawmaker sponsoring terrorism in the country, noting that the 496 members of the national assembly are now seen as prime suspects because the president didn’t name the lawmaker involved.

He said, “As reported by media houses across the world, President Buhari in his Independence Day speech, told the world that one of us is sponsoring terrorism. IPOB by what it is to the face of the law today is a terrorist organisation, even when we have our reservations, because the laws of the land and courts have spoken. Mr. Speaker, that means that 469 members of this National Assembly are crime suspects.”

“On that fateful day, I went to Akure to be part of the burial ceremony of our fellow colleague, Hon. Expensive. On Saturday, I had to honor an invitation to Ghana for a wedding. Mr. Speaker, it will amaze you what I faced in the hands of Ghanaian officials.

“They detained me for about four hours; that they are trying to confirm something. I stayed at the airport for four hours, missed the wedding I went for. At the end of the day, one of them walked up to me saying sorry sir, there’s an announcement in Nigeria that a member of parliament is sponsoring terrorism and we are put on red alert to ensure that no member of parliament comes here to hide or cause trouble. I had to come back home dejected.”

Igbakpa further stated that he had been inundated with calls from all over the world, asking him who amongst the lawmakers was sponsoring terrorism.

His said, “the right thing for a father to do is to name and shame any child that’s bringing about division. But Mr. President didn’t shame that person or name them instead he named 469 members. Because of the fact that we’ve always cooperated and the fact that Nigeria has a lot to deal with. So, I’m appealing, if not, the right thing to do is to invoke Section 88 of the constitution they can tell us who among us is sponsoring terrorism.

“Section 88 reads: “88(1) Subject to the provisions of this Constitution, each House of the National Assembly shall have power by resolution published in its journal or in the Official Gazette of the Government of the Federation to direct or cause to be directed investigation into -(a) any matter or thing with respect to which it has power to make laws,…”

He, therefore, appealed to the leadership of the House to liaise with their counterparts in the Senate to have an audience with the President so that he can name sponsor of terrorism amongst the lawmakers.

He then demanded that the President should commence the prosecution of the individual and if convicted should have been completely shamed, as it is wrong to throw a blanket accusation on an arm.

In his ruling, the Speaker of the House, Hon. Femi Gbajabiamila said Igbapka’s motion is noted, adding that the House would get back to him on the matter.

READ:  2023 Presidency: We Will Continue To Lead Nigeria, No One Can Stop Us - Northern Elders