Prince Kanu Meme, the younger brother of the detained leader of the Indigenous People of Biafra (IPOB), Nnamdi Kanu, has accused the Department of State Service (DSS) of maltreating his elder brother in their facility. 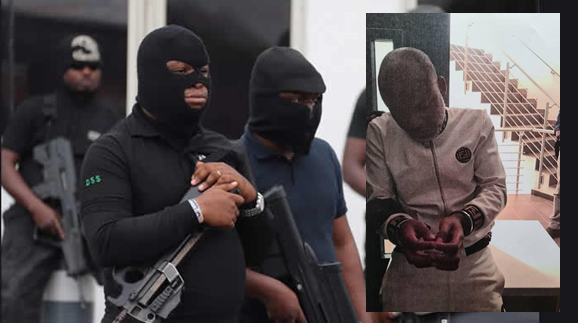 Kanu is currently detained in the DSS facility on the order of Justice Binta Nyako of the Federal High Court in Abuja on the treasonable felony charges preferred against him by the Federal Government of Nigeria.

In a post shared on his Twitter page, Kanu’s younger brother revealed that during his visit to the DSS facility on Monday, the IPOB leader told him that he has been denied food since on Sunday.

Prince Kanu Meme also claimed that the DSS has denied Nnamdi Kanu his medical report after taking his blood for more than 21 times.

He wrote, “Just visited the Alpha Mazi Nnamdi Kanu, at the Department of State Security Services Abuja. During my interaction with him, he told me that he has been denied food since yesterday.

“As if that wasn’t enough, DSS had also denied him his medical report after taking his blood more than 21 times. They have continuously disobeyed all the court orders.”

Taking to his Twitter page, the Special Counsel to Kanu, Aloy Ejimakor, also condemned the dastardly action of the secret police for treating his client inhumanely.

Ejimakor wrote, “Starvation of a detainee is an act of TORTURE. It’s illegal and immoral to boot. Any nation that condones it has diminished its sovereign right of incarceration.”

This comes just a few days after the Federal High Court in Abuja adjourned Nnamdi Kanu’s trial for the second time from January 19 to 18 next year.

ASUU Says It Will Soon Embark On Strike, Gives 24 Hours To Announce Next Action