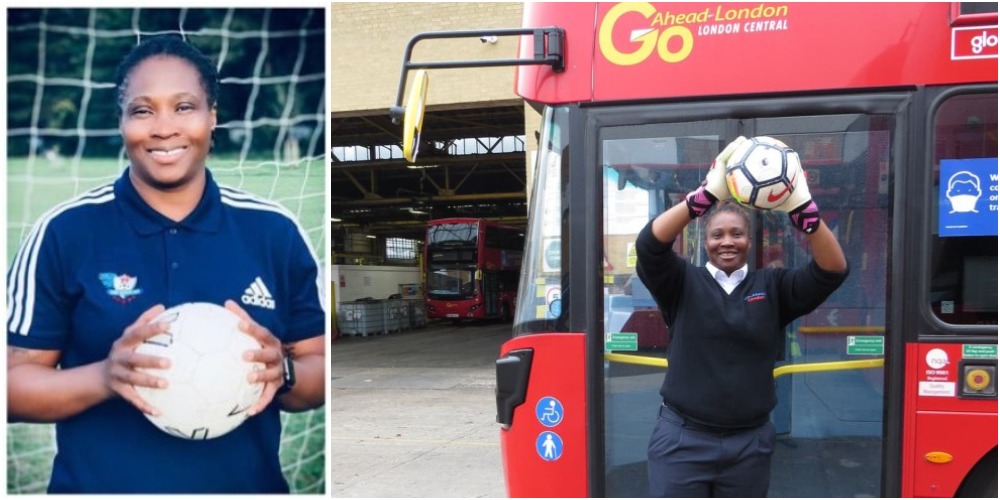 Ayegba donned the Super Falcons’ famous green and white jersey in the 2007 Women’s World Cup, the 2006 and 2008 African Women’s Championships.

The former goalie also enjoyed an 11-year stint as a professional footballer in Finland, winning the league title in 2013 with PK-35 Vantaa.

The 35-year-old, who moved to England in 2018, says she had visited London for years on holiday and always admired the double-decker buses

She now drives the number 185 between Lewisham and Victoria in a time the UK is battling with a crisis of driver shortage during the pandemic.

READ:  24-Year-Old Man Steals 126 Slippers From His Neighbours So He Could Have S£x With Them [Photos]

Ayegba works for Go-Ahead, the bus and train giant that operates about a fifth of the capital’s buses on behalf of TfL, where bus drivers reportedly earn as low as £26,000 and and as much as £31,000 and above.

Speaking to Standard UK, the 35-year-old said that “When you are trying to save the ball, you need safe hands. But there are ten others on your side. When you drive a bus, you are on your own.”

Ayegba, whose favourite player is Cristiano Ronaldo, says she doesn’t play football anymore due to her age, though she has a coaching license.

“I am old. You have to know when to stop,” she said, adding that “Mentally you have to be 100% ready, if you are a goalkeeper the defenders can help you. You can’t make any mistakes driving a bus.”

KanyiDaily had also reported how a billionaire businessman and the Chairman of Udala Football Club, Chief Philip Udala, was killed by unknown gunmen in Anambra State.