The United Arab Emirates (UAE) has directed all foreign airlines not to bring Nigerians to Dubai due to the recent diplomatic row between each country’s flag carriers, Air Peace Airline, and Emirates Airline. 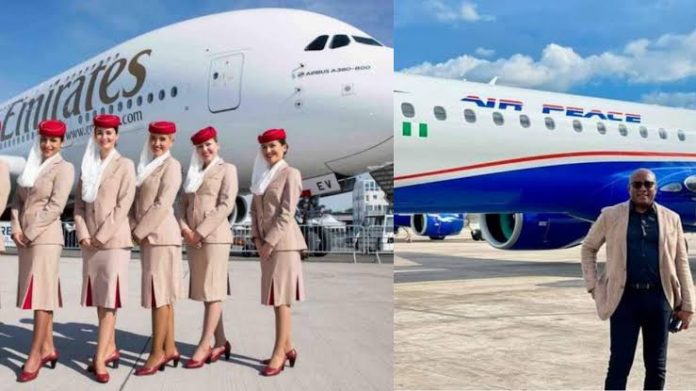 It was gathered that this Monday morning, Ethiopian Airlines, Turkish Air, and other international airlines going to Dubai from their bases refused to board Nigerians whose final destination is the UAE.

A source at the Muritala Muhammed International airport in Lagos revealed that airlines were directed not to airlift Nigerian passport holders to Dubai.

So far, hundreds of passengers are affected by this directive as Ethiopian Airline a few minutes ago offloaded their Nigerian passengers to Dubai.

”UAE says no entry for Nigerian passengers from any airline. Ethiopian just offloaded all passengers heading to Dubai. We are voiding Dubai bound tickets,” a source at Abuja Airport told DAILY INDEPENDENT.

READ:  Nigeria At 59: Apostle Suleman Reveals What Nigerians Must Do On Independence Day

KanyiDaily recalls that last weekend, Emirates Airline had suspended all its flights to Nigeria indefinitely in reaction to the Federal Government’s decision to reduce its operation in the country.

The Federal Government had on Thursday, December 9, 2021, withdrew its approval for Emirates Airlines winter schedule and also reduced the carrier’s daily flights to Abuja to just once a week.

He regretted that despite this approval, the GCAA refused to grant Air Peace three weekly frequencies to Sharjah, which the airline requested for, but rather approved just one frequency weekly.

According to him, the GCAA had attributed its refusal to grant the three frequencies to the airline to inadequate slots in Sharjah airport, stressing that the government would continue to protect Nigeria’s businesses.

But in what appears like a fight-back, Emirates Airline announced the suspension of its operations between Nigeria and Dubai, noting that will be ready to reinstate services once UAE and the federal government work on a solution to the ongoing issue.

KanyiDaily recalls that Saudi Arabia has also banned flights coming from Nigeria into the country due to the outbreak of the new COVID-19 variant Omicron.

Related Topics:DubaiNewsNigeriaTravelUAEUnited Arab Emirates
Up Next